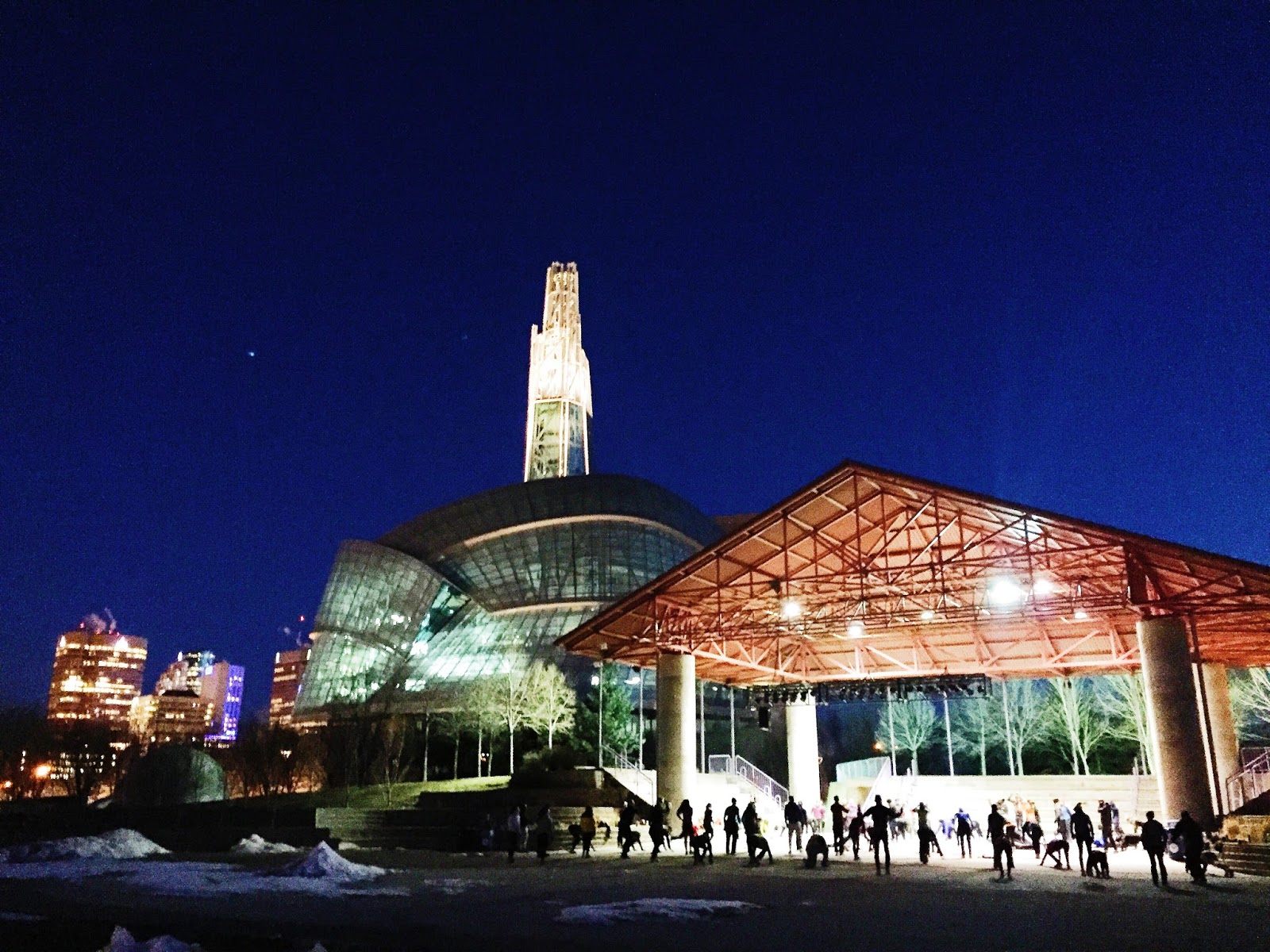 I’ve heard about The November Project for a while now. It’s a mysterious exercise group that meets 6:15 am every Wednesday at the skatepark at The Forks. No cost, no intimidation, “just show up.”

So, I finally showed up.

When I arrived, a group of 100 people were ready to workout and I quickly realized, OH THIS IS A THING.

There were hugs to start. New for me, but I’m friendly, so I roll with it. My past group exercise class experience was boxing, so this is a welcome change to punching. 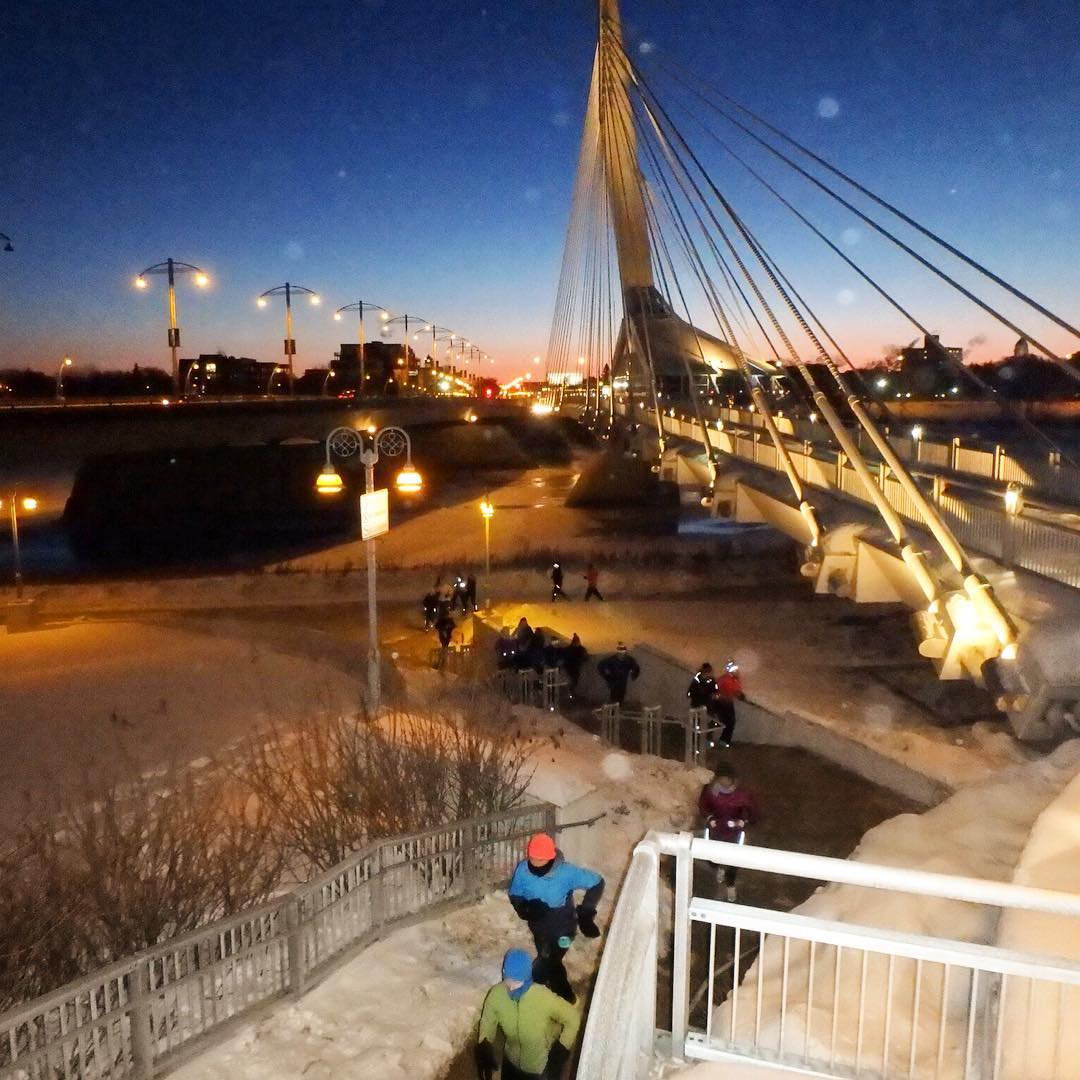 Winnipeg is one of 30 cities that operate a ‘tribe’ under ‘The November Project.” TNP is a grassroots urban exercise movement. Started in 2011 by two Bostonians who wanted “a simple sense of accountability to motivate and encourage people of all ages, shapes, sizes and fitness levels to get out of their beds and get moving.”

Winnipeg’s tribe is run by Rick Duha, Thomas Hall and Derek Page. They are eager, positive and motivating guys — exactly what you want at 6:15am. 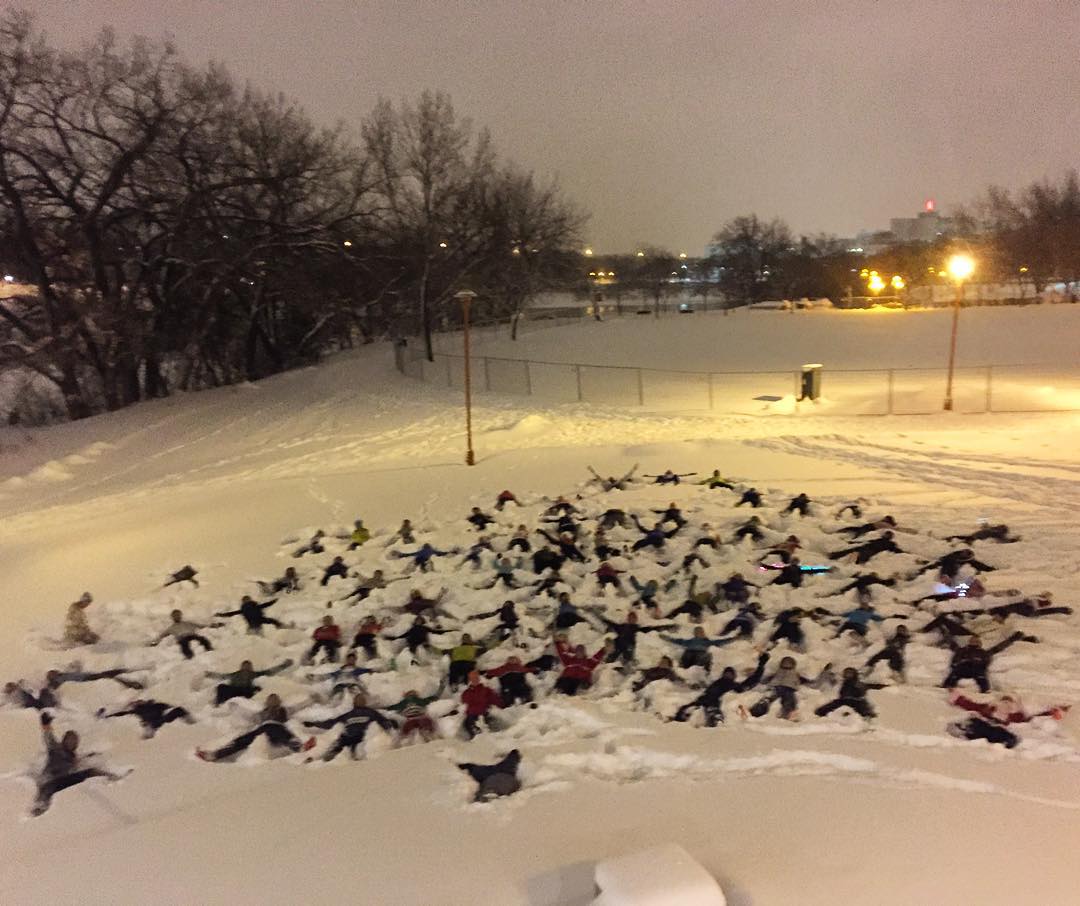 This isn’t any ordinary exercise class. The world is the gym. Your body is the weight. Using the skatepark, Esplanade Bridge, CMHR, Festival Stage, the grass, hills, the Red River Mutual Trail in winter- basically using the entire world of The Forks, the leaders craft fun, inspired and different workouts. Even snow angels are fair game.

On this particular morning, we did an easter egg hunt. People took turns running up giant-sized steps on the Festival Stage to grab an egg. Inside the egg was an exercise the entire group had to do until the next person grabbed an egg. Burpees, mountain climbers, jumping jacks, plank walks. Your fitness level is irrelevant, you can do 2 or 25, it’s all good. There’s no winning, it’s just about doing.

It was fun. Even the seven minutes of burpees. Not drill sargeant-y in the least. Enthusiastic and positive. It felt like we were a bunch of neighbourhood kids playing outside. There was chatting, encouragement, laughing and good times all around.

Who are the people that do this? All kinds of people! A variety of ages up to 60. It’s the anti-gym. No stare downs. No judgement.

We finished with a giant game of rock, paper, scissors. If you lost you had to do five pushups. 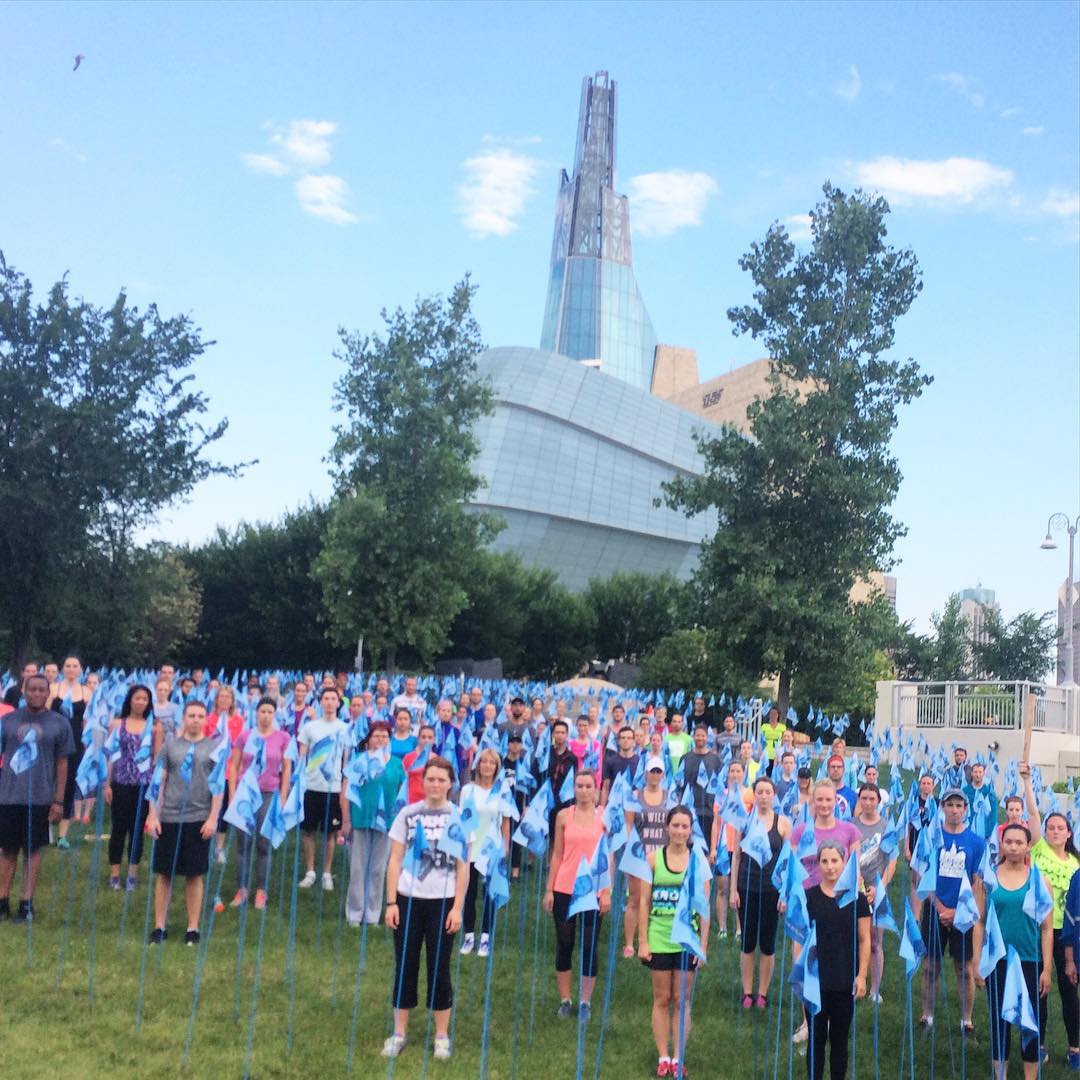 I was surprised at how much I liked working out in a large group outside in the world. I felt like I was a part of something. Something bigger. Winnipeg was quietly sleeping and there I was standing among 100 people doing jumping jacks admiring the sunrise against at the Canadian Museum for Human Rights. Pretty cool.

Post workout, I trotted away from The Forks feeling energized, happy and motivated to start my day. 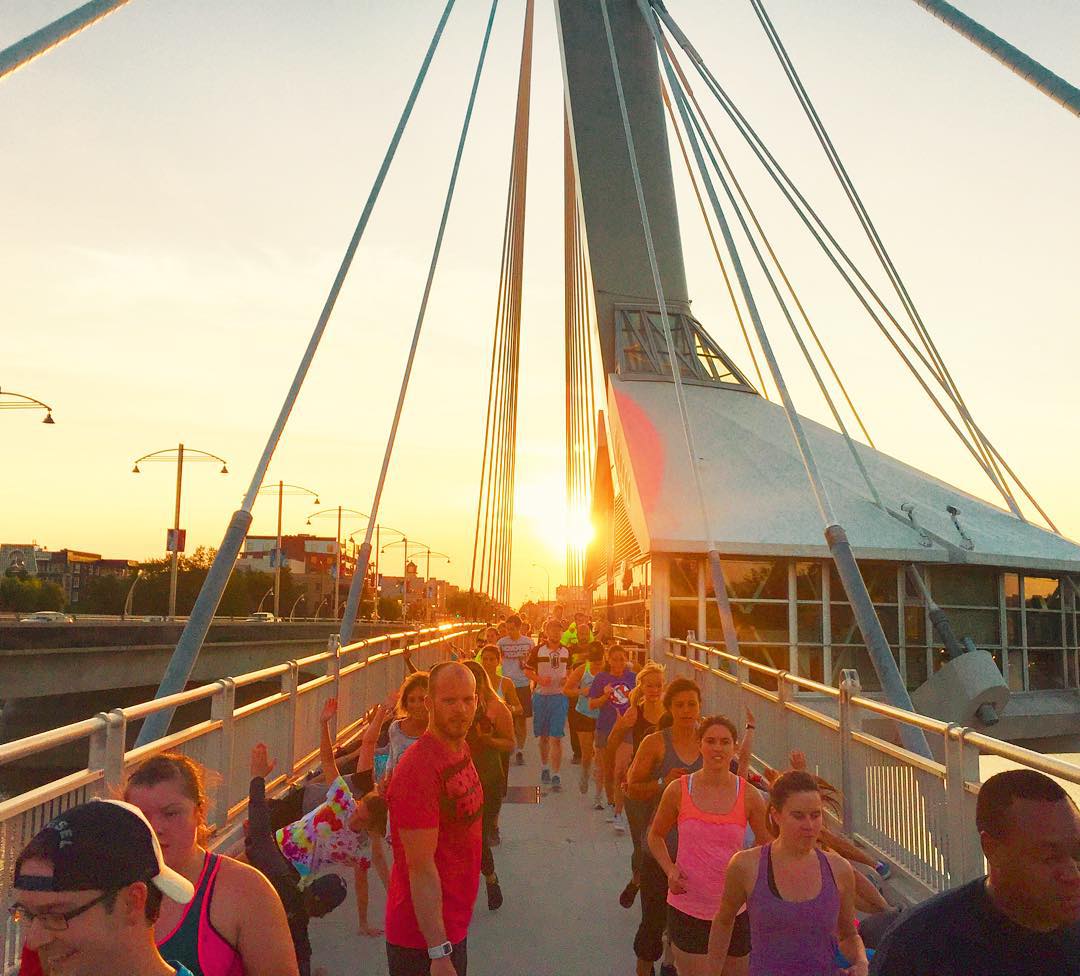 The November Project has a goal to get 200+ people by early June. Set your alarm, sleep in your gym clothes, wake up and go. You won’t regret it, even if you’re a not a hugger.

Lindsay Somers is a Lifestyle Health Coach. You can follow her healthy lifestyle adventures on Instagram and Twitter@lindsayhsomers.