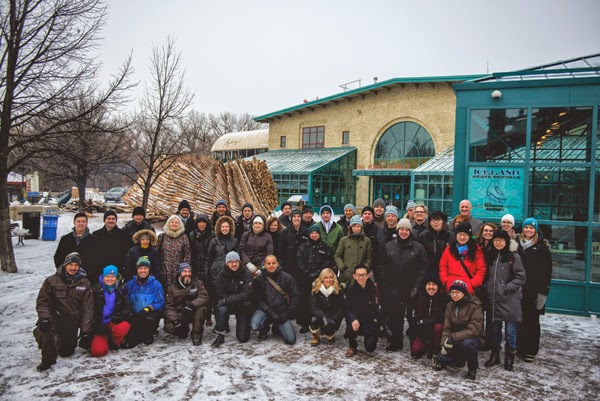 The warming huts are nearing the finish line and soon will go out on the ice. This week, winners of the Warming Huts v.2015 competition were at The Forks for what is affectionately know as Build Week. Teams have come from near and far to help bring their winning designs come to life. Throughout the week shelters and art installations began to take shape.

Back in November 2014 after the competition winners were announced, plans on how to turn the drawings into real life quickly were underway. Old skis, chairs and culverts made for an unlikely shopping lists of supplies needed to complete the huts. So Facebook posts, tweets, and phone calls went out and we got great responses (like Canada Culvert who stepping in to help with the Hole Idea by supplying the materials and labour). Supplies came in, and over the last few days we've seen the huts come together (check out #warminghuts to see some of the progress).

Although each warming hut ranges on the scale on "warmth", they all bring creativity and imagination to the Red River Mutual Trail. The huts, along with their creators, get to share a story through art and architecture with those that stop by. And the huts (like those from previous years) will continue to inspire new stories as people sit in them, interact with them, and make their own memories with this year's winning designs. Be sure to share your story by sharing with us on Twitter, Facebook and Instagram, using the hashtag #warminghuts. 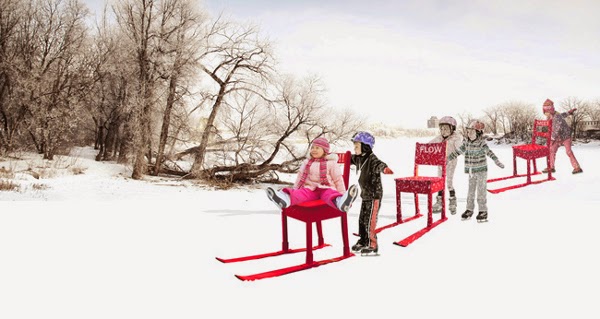 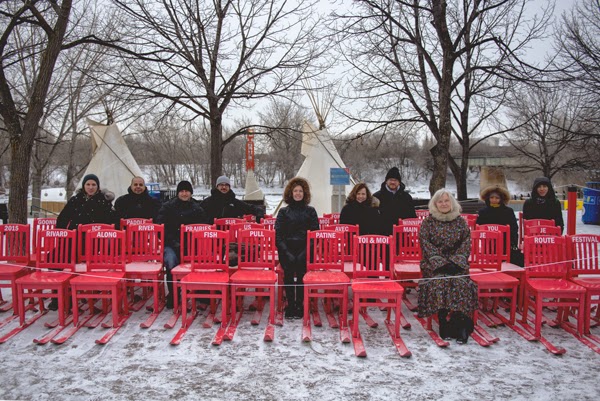 Story behind the hut: Recycling Words is an interactive art installation that assembles everyday objects and words to create a playful river narrative. Drawing reference to the physical and vocal exchanges that historically flocked the Red and Assiniboine rivers on canoe, Recycling Words offers a new cultural and social means of gathering along the Red River Mutual Trail. 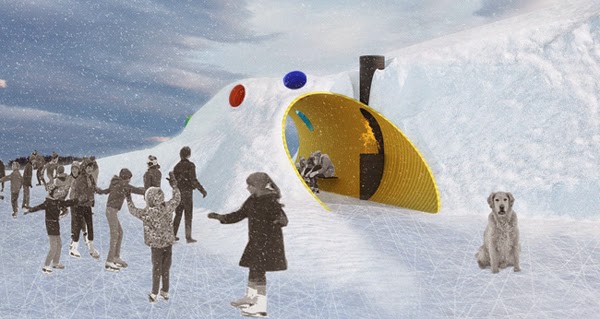 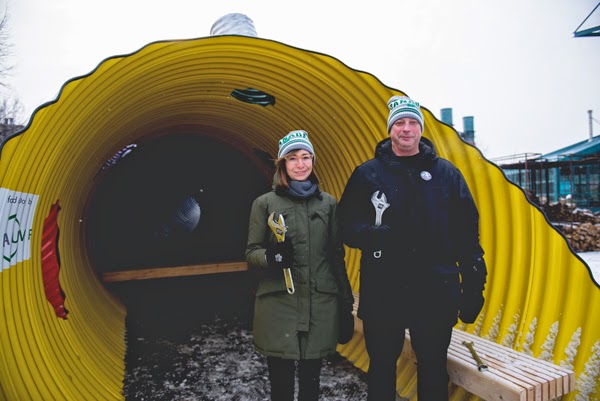 The portable hole - first developed by Prof. Calvin Q. Calculus in the 1955 Looney Tunes animation, “The Hole Thing” and later sold by the Acme Company - has a troubled history. Almost right from inception, the ominous, mobile void was put to use for evil purposes - first as an effective enabler for a vicious crime spree and later as a means to capture the American desert fowl Geococcyx californianus or as it is commonly known as, “the Roadrunner”. It is important to note that the later use always ended up with the direct opposite result than that of the intended; which is likely why the portable hole is no longer commercially available. This proposal takes as a starting point the portable hole, and by utilizing modern paint technologies, adds color. The resultant 1’-6” diameter holes - which can be located anywhere along the snowy banks of the Assiniboine or Red River – are resistant to being co-opted by evil forces (including the greyness of soul-sucking foul weather) due to the sheer cheeriness of the palette of introduced color. Further, a large, bright and yellow 10’ diameter hole is horizontally located in a 35’ long snow drift and provides skaters a warm and sheltering burrow in the snowy river bank. Since they have an inside and outside, the holes also furnish the shelter with an abundance of light and sky views.

Special Thanks to Canada Culvert for their donation of materials and work to help get this hut built. 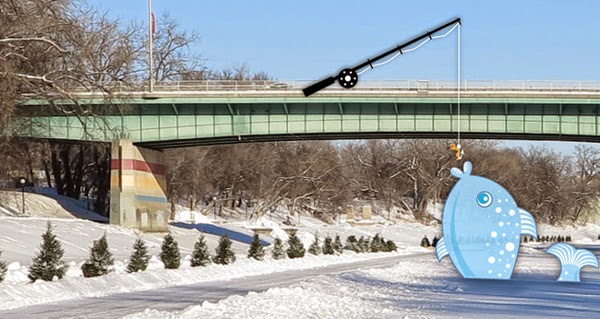 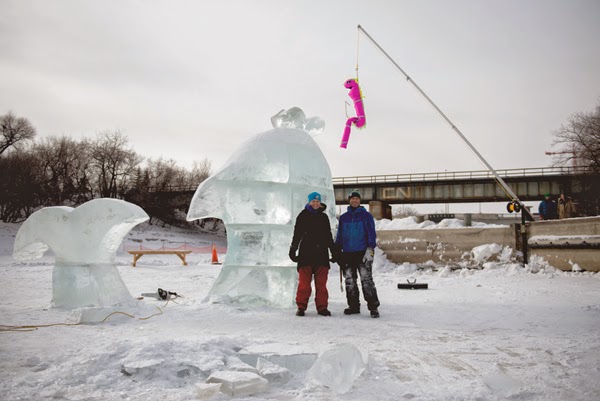 Eric drills a small hole in the ice. He unfolds his chair and sits down. He pours a cup of hot coffee, and he sinks a bait in the deep, dark water. He waits. He drinks some more coffee. He waits. Finally, Eric gets a fish so big that it doesn’t make it through the hole. He cuts the line and he goes home with a story to tell … “It was this big!” The story is a good one, the fish gets bigger by the day, and the myth grows. Somebody is impressed, somebody is curious, somebody is laughing. But one day the fish wants to tell the story itself, the fish wants its 15 minutes of fame … That day is today. No more story telling. No more myth. THIS BIG is the connection between two worlds: under and over the ice. We could say it is a “semantic installation” or a “social anthropological statement”, but it is actually an ice sculpture, a big toy. 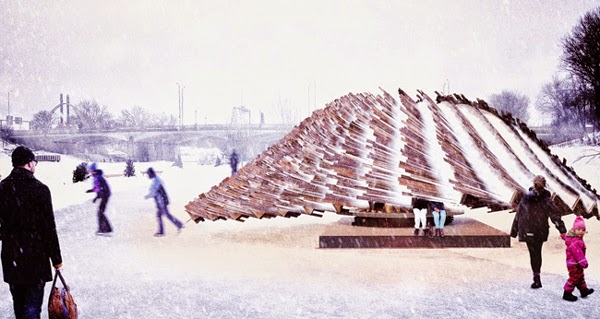 By: The Hybrid Hut by: Rojkind Arquitectos 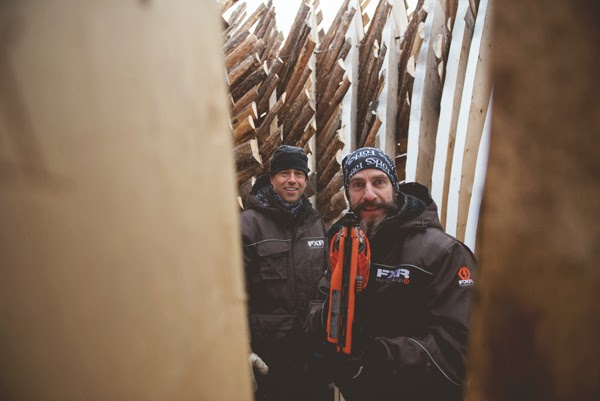 Creating new hybrids through computer-aided design and traditional craftsmanship. With the evolution of technology in the industry, it puts into question the participation of artisans in the construction of the design space to the extent that the trades are disappearing. What is the use of contemporary technology if it can’t learn to grow with the processes already acquired by artisans and traditions? And how can an accomplished craftsman learn new process through technology? What is the role of the architect that has access to both scopes? 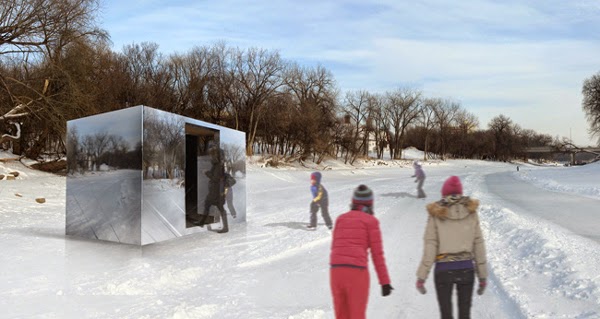 By: Architecture Students from the University of Manitoba 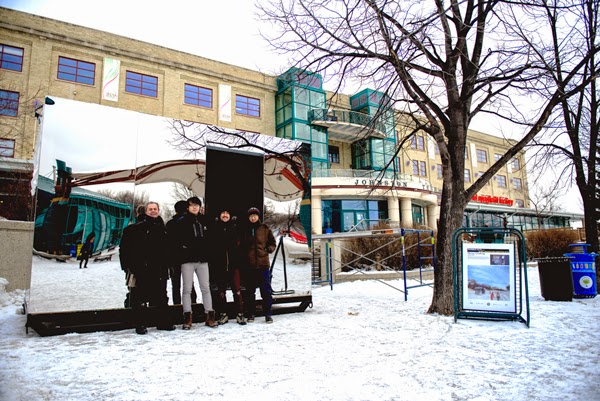 The story behind the hut:
Using the concept of one-way mirrors and polished stainless steel panels to create a mirror box, skaters will perceive the warming hut as part of the winter landscape, yet closer inspection will find that the hut appears to reflect the surrounding. As skaters walk into the hut they realize that the one-way mirrors provide the precious scenery of winter. The design plays with the idea that the enclosed structure become transparent and visitors can still find warmth within an “open” space.

There has been a lot of time and resources poured into he completion of these huts. Many people have gone above and beyond their normal jobs and to them we say a big thank you for all your help and support.