The Forks history goes back much further than 25 years. The Assiniboine and Red Rivers have a rich, unique history that has shaped Winnipeg into what it is today. This year, 2014, is the 25th anniversary of The Forks as we know it today.

The Forks Market being built.

Atrium of The Forks Market under construction.1990: National Sculpture Competition for the Path Through Time was awarded to Manitoba artist Marcel Gosselin. Sunlight shining through this sculpture illustrates people’s influence on this land throughout history. Bronze carvings of tools are reflected onto the stone of the sculpture at different times of the year as the sun’s path moves through the sky. The Wall Through Time forms a graphic retelling of historic events that took place at The Forks throughout its 6,000-year history.

Wall Through Time.1990: The opening of the Canopy area and skating rink.

1991: Construction of The Forks Historic Port is completed which features layered landscaping and a lighthouse.

The Forks Historic Port during construction. 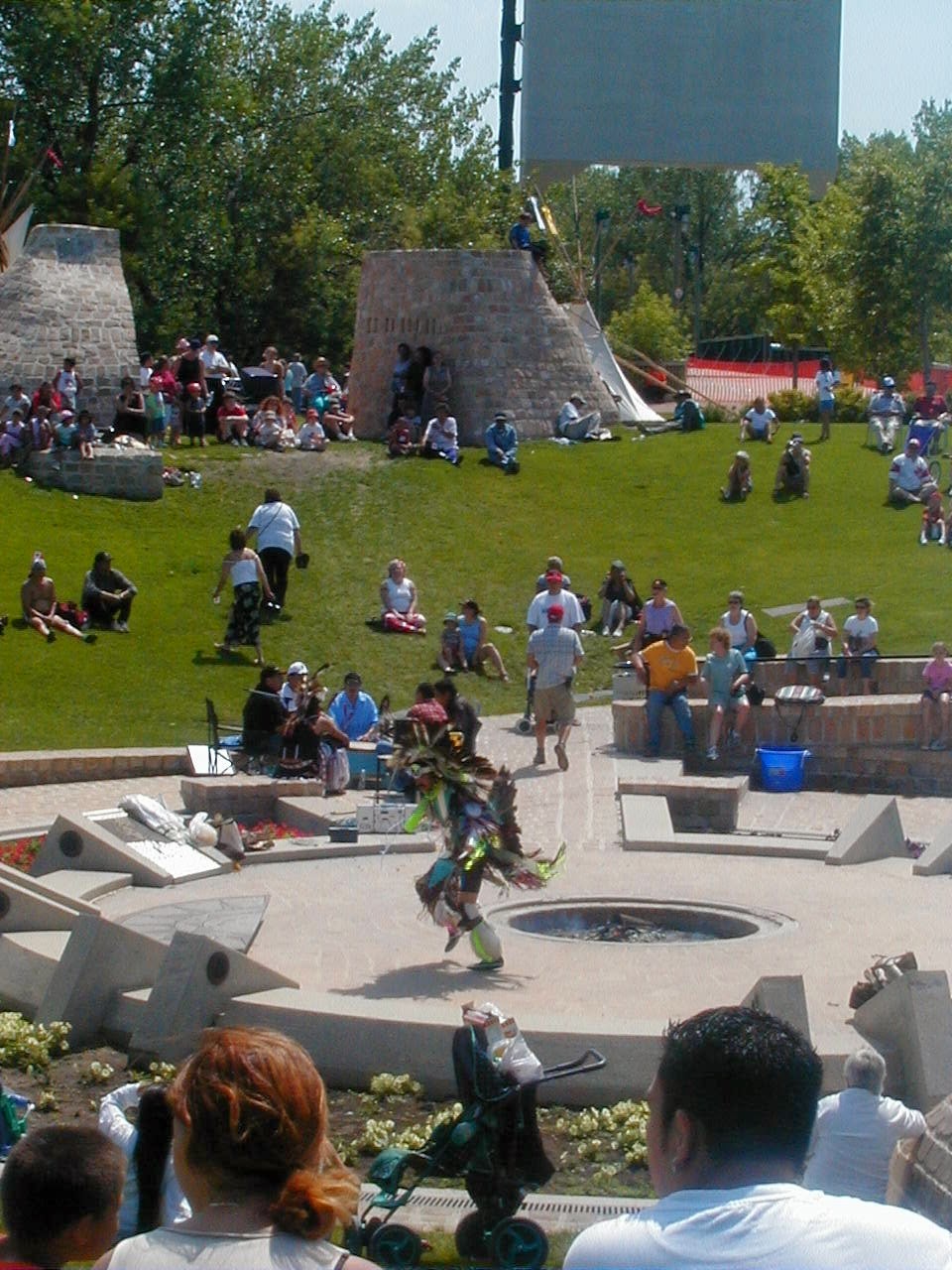 Oodena Celebration Circle overlooking Inn at the Forks1993: The Johnston Terminal was transformed into a retail office complex including Explore Manitoba Centre. The original building was built between 1928 and 1930 and was used as a giant cold storage warehouse. 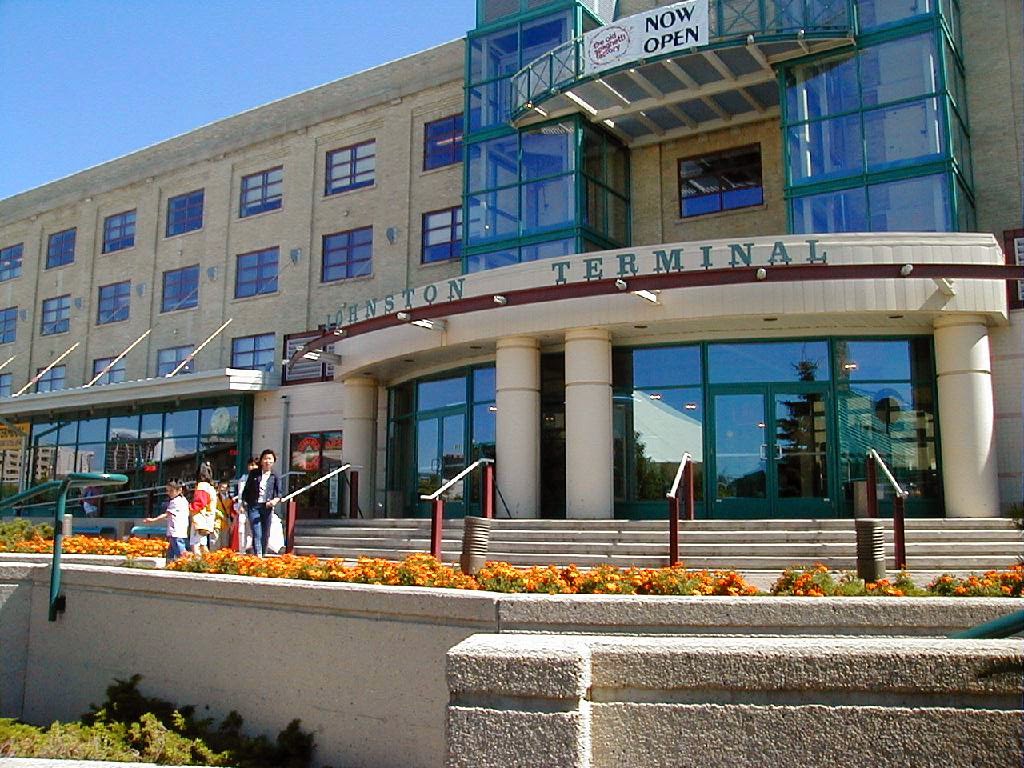 1994: Manitoba Children’s Museum opens in what was formerly called the Brakes and Boiler Building. The B&B Building was built in 1889 and is now known as the Kinsmen Building.

Manitoba Children's Museum under construction.1995: The Forks North Portage Partnership is created with a mandate “to act as a catalyst, encouraging activities for people in the downtown area through public and private partnerships, revitalization strategies; and to work to ensure financial self-sufficiency.” The Partnership helps ensure The Forks remains a special and distinct, all-season recreational space that embraces historical, cultural, residential, and/or commercial uses. 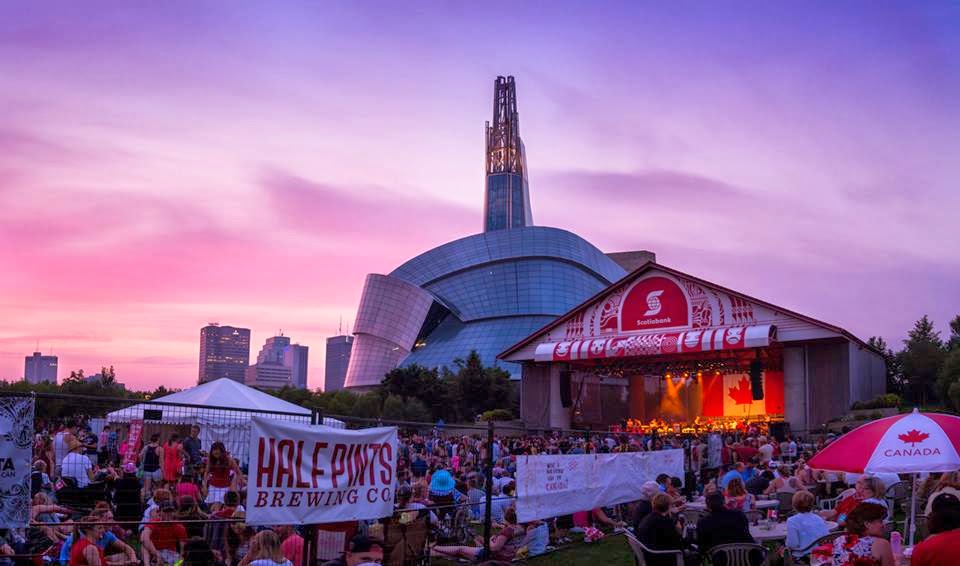 1999: A former steam plant building, built in 1947, is converted into a television studio. Today it is home Citytv which broadcasts the local Breakfast Television show.

2000: The 21 gambling sticks created by artist Robert Houle are installed along the Riverwalk as an Aboriginal millennium tribute.

2003: The three-level parkade opens at The Forks.

2004: Winnipeg and St. Boniface are connected once again after the completion of the Broadway Promenade pathway and Esplanade Riel pedestrian bridge. The iconic Esplanade Riel was designed by Etienne Gaboury who is the invited architect for Warming Huts v:2014. The Esplanade Riel is the only bridge in North America featuring a restaurant.

Esplanade Riel2004: The five-storey Inn at the Forks is constructed. It has 116 guest rooms and suites and a reception area for up to 200 people. It is the first Canadian application of the “Redi-Maid” system that ensures maximum energy efficiency without disturbing hotel guests.

2006: Plaza at The Forks Skate Park is completed and covers a total area of 44,000 square feet. It is Canada’s best and largest urban skate plaza and bowl complex. Plaza at The Forks has the distinction of being sought-out by world-renowned skaters such as Tony Hawk and Bam Margera. 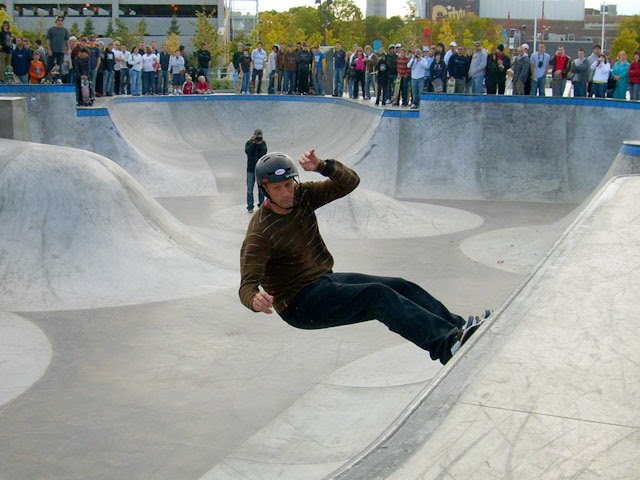 Tony Hawk at Plaza at The Forks Skate Park. 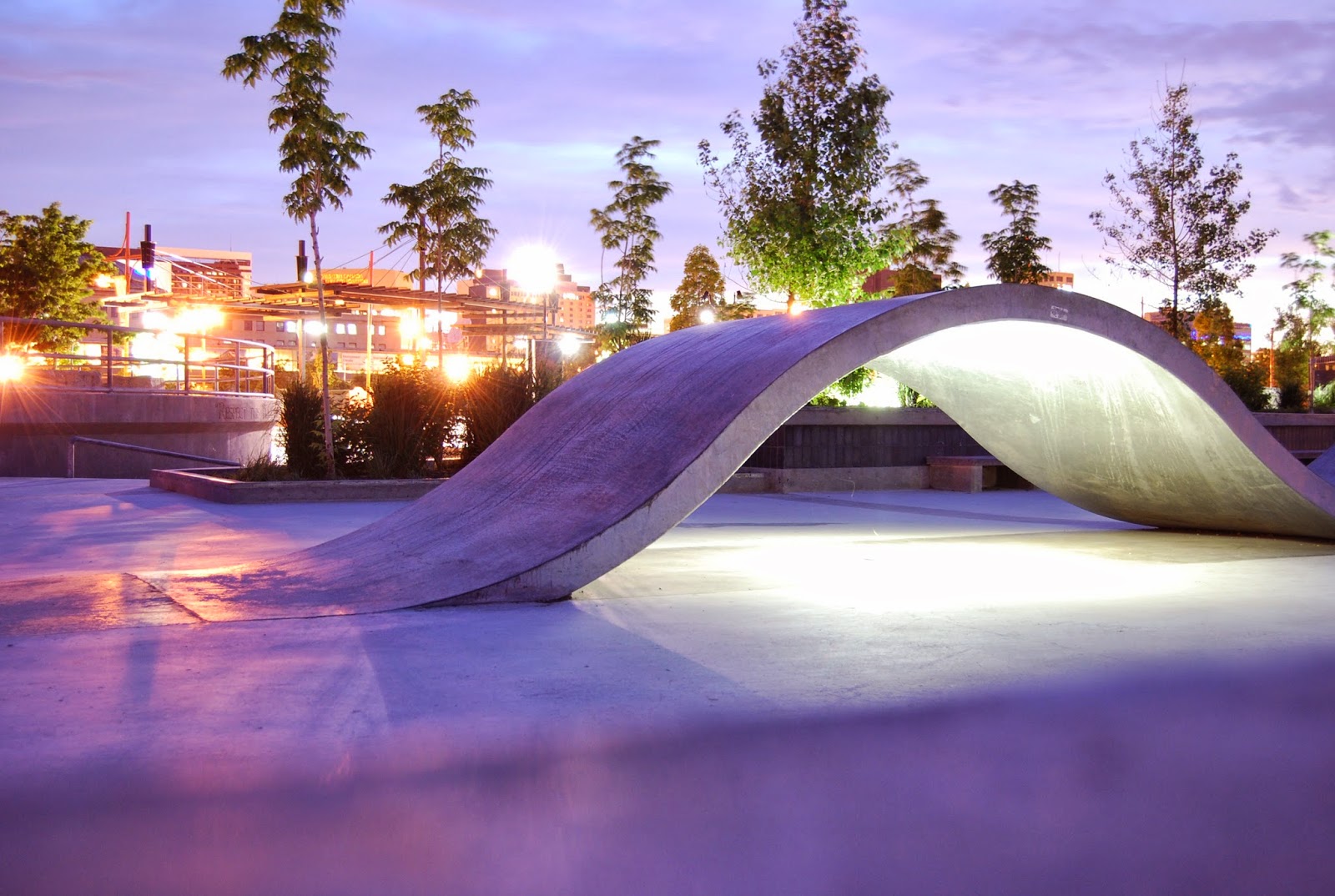 2008: The Guinness Book of World Records recognizes the Red River Mutual Trail as the world’s longest skating rink at 8.54 kilometres. 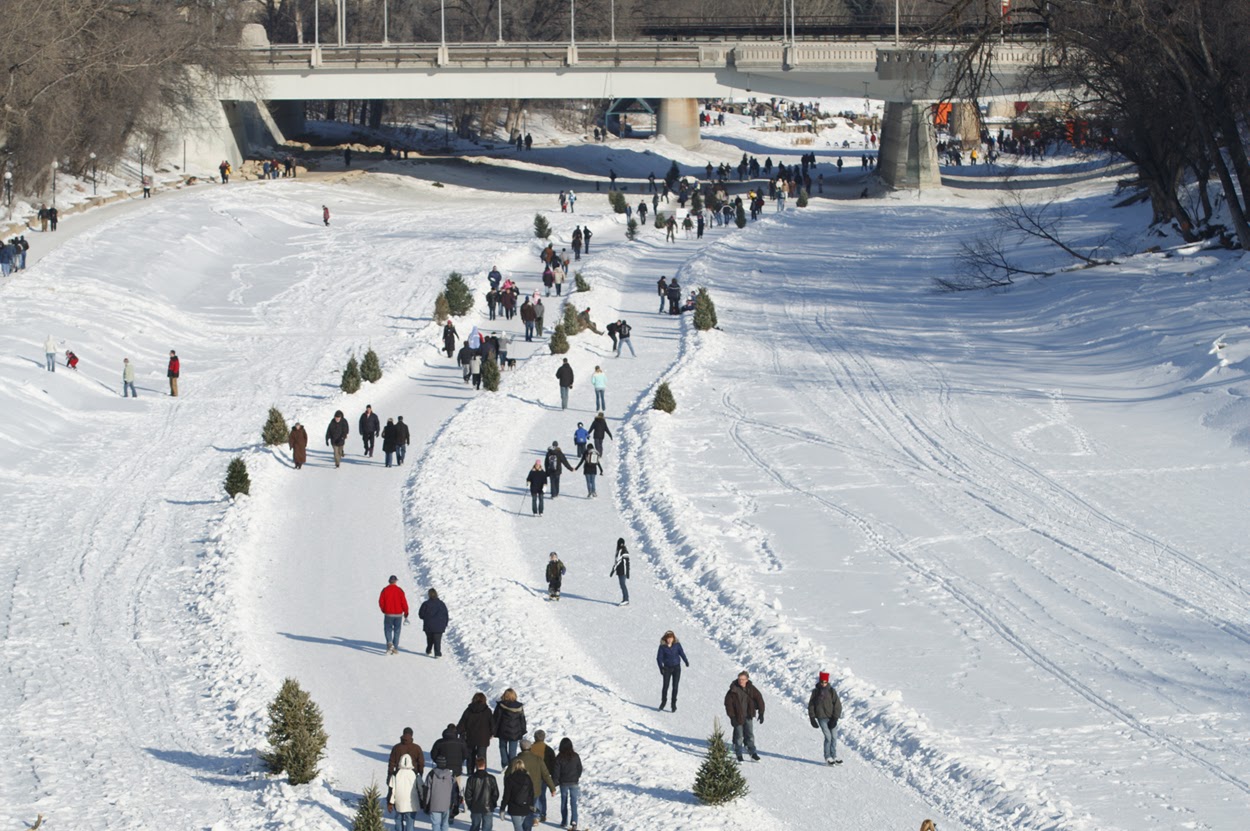 Red River Mutual Trail.
2008: Construction begins on the Canadian Museum for Human Rights. It is the first new national museum created in Canada since 1967 and the first national museum built outside the National Capital Region. The purpose of the museum is to increase understanding and awareness of human rights, promote respect for others, and encourage reflection, dialogue, and action. 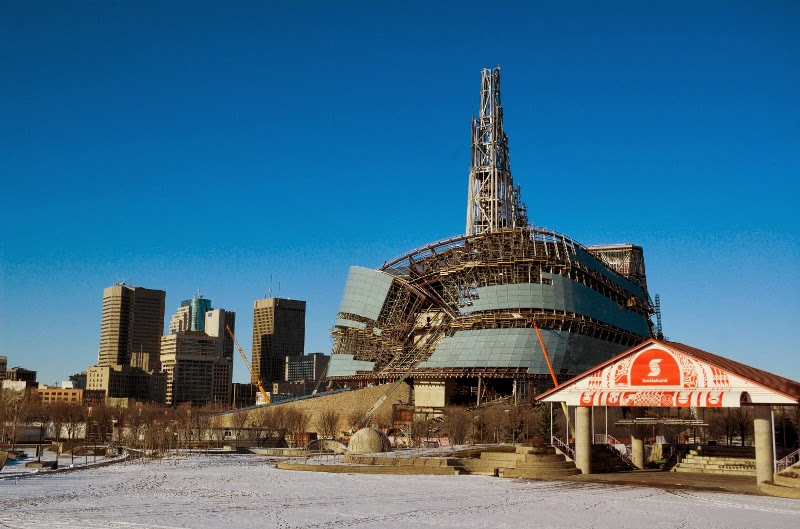 Canadian Museum for Human Rights under construction.2009: Part of our commitment to reduce our carbon footprint we initiated Target Zero. So far we have competed a geothermal heat pump system, biofuel, bio composting, water use, and recycling projects. To date, we have reduced our greenhouse gas emissions by 42% (448 tonnes of CO2e) and reduced our heating costs by 14%. 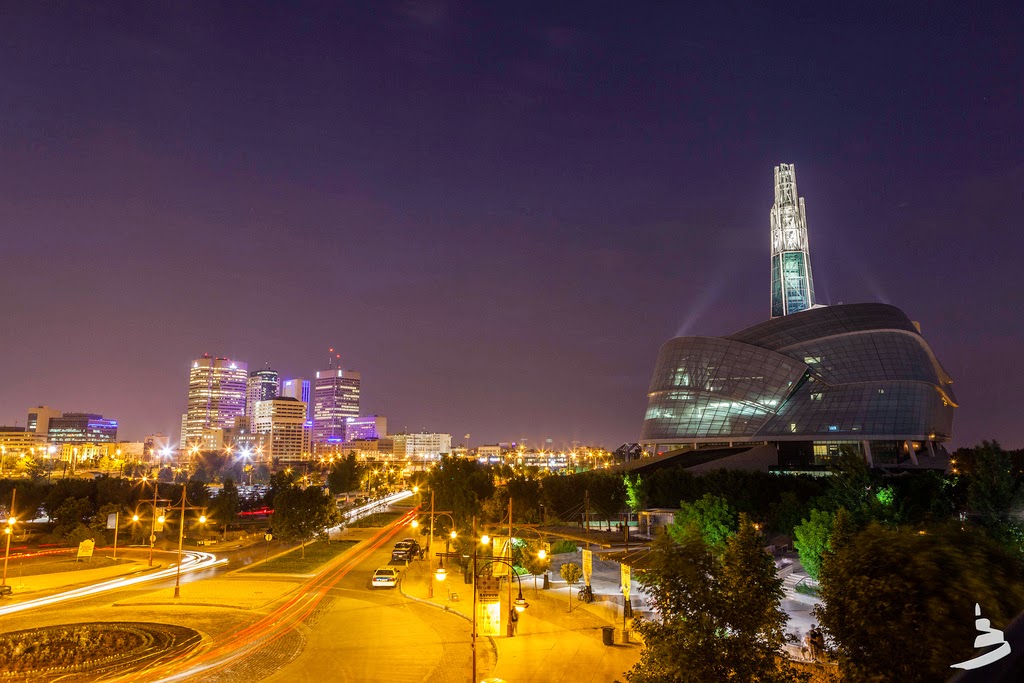 The Forks is more than just an historical site or a meeting place. It is both physically and culturally the heart of Winnipeg. Over 25 years of delicate heritage restoration made The Forks into what it is today. The Forks embraces not only summer but winter activities. Over 4 million visitors visit The Forks every year with the number of visitors in the winter rivalling the summer. With the opening of the Canadian Museum for Human Rights in the fall this has been a well-rounded 25 years at The Forks.

~Taylor Cole, Intern at The Forks