What started four years ago as a simple idea amongst a few of us here in Winnipeg, has blossomed into an event that involves a great many people. What has changed is the size of the event, the amount of energy required to put it all together, and reach into the broader arts community both here in Winnipeg and around the world. What has not changed are the simple ideas that instigated the project in the first place. At a very fundamental level, humans need shelter, and humans need art. The goal of the Warming Huts really plays with these two needs in a way that is manageable for the youngest child to the oldest grandmother to enjoy. It is a great pleasure to be on the skating trail and overhear the comments and thoughts of the skaters and walkers who take in the scene. 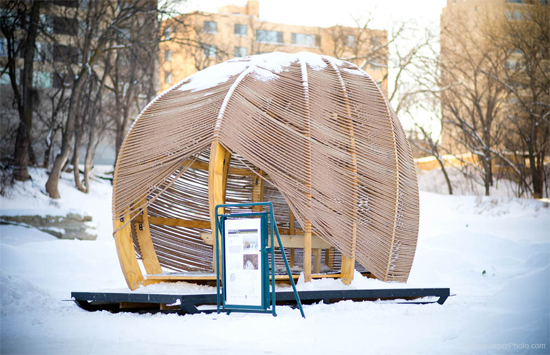 In the first year of the project we were pleasantly surprised by the enthusiasm that many in our immediate community of architects, landscape architects, and artists showed for the project. In the second year we were overwhelmed by the interest shown from an international community who submitted projects from the far reaches of the globe. Momentum of interest in the project has continued to grow, and while we are no longer surprised that people from other climes are interested in our project, I do find myself fascinated that someone from Israel, or New Zealand actually learns our context and then submits brilliant ideas in response to our needs here in Winnipeg. We have people from these places looking forward to coming to Winnipeg when it is very cold. There are many in Winnipeg who have known for a long time that one of our great assets in Winnipeg is our winter. While others would much sooner leave Winnipeg when it is frigid, those who remain have to learn to embrace it. I think we can prosper from enthusiasm that our winter tourists are showing for the cold. 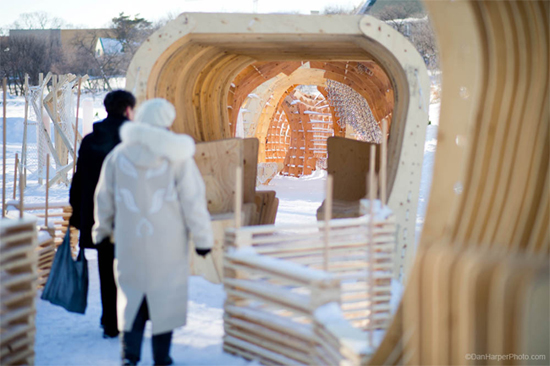 During the building blitz in between January 22-25, the temperatures were horrifically cold. Power tools froze and malfunctioned, fingers and toes got painfully cold, and the brave souls that built the huts during that week were very brave for their relentless attack on the matter of getting the projects built. On one of the coldest mornings, I observed a grandmother and her two grandchildren skating up the trail. They did not go far, but to see them on the trail in -25ºC was awe inspiring. I could be wrong, but I would suggest there is no way this loving grandparent would have considered taking these kids to a hockey rink to skate in circles. Somehow the frozen river, the trail, and the adventure of it all inspired them to lace up and head out on the ice. It is for these people that such efforts are made in getting the _Warming Huts _together. On that sunny day, out of the wind, with a little physical activity, it was quite possible to stay warm, and they seemed to be having fun. 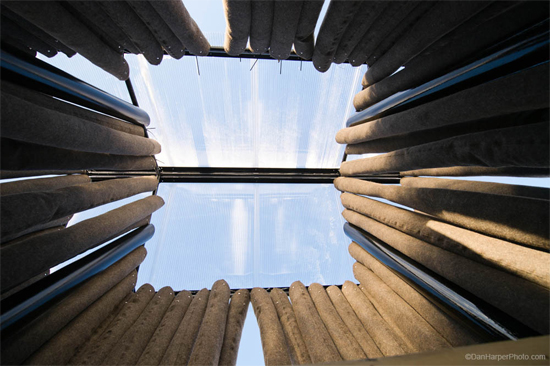 From the point of view of curating the event, this year represents and important evolution as we introduced Art pieces that blurred the lines of shelter, architecture, art, and specifically the mediums within the world of Art. The results of the competition were such that two local teams performed exceptionally well. The team of Plain Projects, Pike Projects and Urban Ink gave us Hygge House. I would venture to guess that no single building or work of art in Winnipeg will be photographed as many times at Hygge House. I am sure there are literally thousands of digital images of friends gathered in the glow of "hygge". Everyone put themselves into the scene with their very own set of joys and memories associated with the scene that was created on the ice with this special Warming Hut. 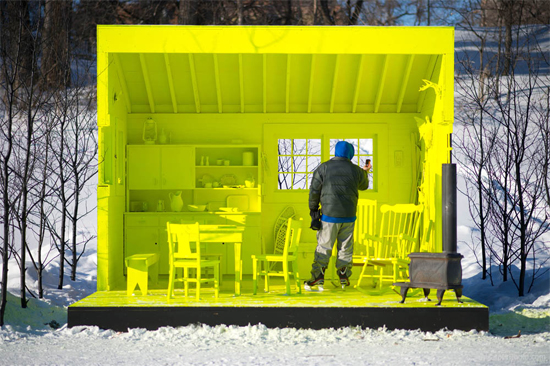 The Sonus Loci was another brilliant project that really challenged the jury to debate the line between shelter and art. This team, made up of members from Winnipeg's Stantec Architecture group and Leanne Zacharias from Brandon University's School of Music, submitted a proposal that perfectly blended thoughts on art and structure. Ultimately the jury decided that the project was more art than shelter, we could not pass up the opportunity to propose to the team that they build their project anyway. The team deserves a great deal of credit for organizing a community of participants and sponsors who helped them realize a truly special project. It was delightful skating amongst the instruments, and stopping to watch as people discovered the project by playing the instruments. 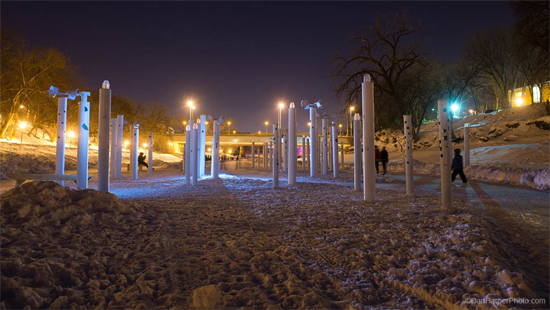 When all the snow is gone and the river is again liquid, we will have just the memories and the photos to support those memories of the winter fun out on the ice. Each year that The Forks build the trail, they create the potential for new experiences and the resulting memories that follow. Who would have thought we would lament the melting river? At least we can look forward to next year when it freezes again!