Roll With It: Free skateboard lessons at The Plaza 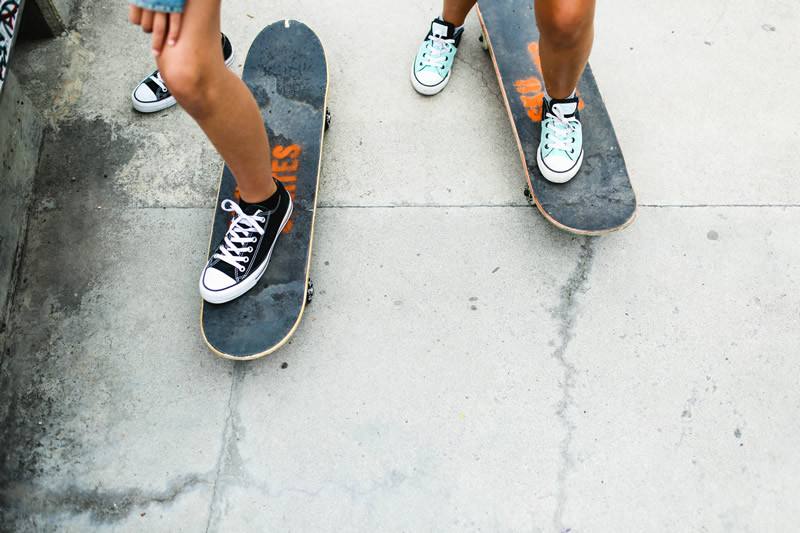 They say that trying new things is good for you — and The Forks has a world-class venue for a sport most of us have never tried.

I’ve long been admiring The Plaza at The Forks. My landscape architect (and skateboarder) husband Bob was part of the team that designed the skatepark. Often, when we ride our bikes by, we’ll stop to watch the action. It’s always a flurry of activity, but Bob points out the smaller moments happening between all the skaters. It’s so much more than a bunch of kids skating around—it’s a community of kindness, persistent practice and mentorship between everyone. It’s inspiring to see people of all abilities hanging out and supporting each other to push themselves to do new things.

I knew I had to seize the opportunity when Sk8 Skates began offering free skateboarding lessons this summer every Wednesday to Sunday from 11:30am-2pm, for all ages, all abilities. You bring the helmet; they provide the skateboard. I brought along a couple of wee friends who were also interested in trying out skateboarding for the first time.

So what happens at a skateboarding lesson?

The eager and friendly instructors meet you at The Plaza. Whether you’ve never skated before, have taken a couple decades off or are looking to improve your switch 180 heel flip (a legit move I’m told), they’ve got you covered.

Our first lesson: stand on the skateboard

I quickly understood that engaging core strength and having general body awareness is huge in this sport. I relied a lot on my ice-skating skills: balance, coordination and careful weight transferring. You can’t tense up and be rigid—you have to literally roll with it. The girls got the hang of it in no time, scooting up and down small bumps and ramps. After 30 minutes, it looked like they had been doing it all summer.

I like being in new situations, and this is a sport I really never thought I’d try. It was a very different way for me to “play” at The Forks. I loved being nestled in between the CMHR and overlooking the Esplanade Riel Bridge. It was a pretty fantastic way to spend an afternoon. Both the girls and myself were eager to come back and build on what we had learned.

Skateboarding was far less intimidating than I thought. If you want to spice up your summer, I cannot recommend this enough. Lessons run until August 29, and sign-up opens at 11am, Wednesday to Sunday at the Sk8 store (second floor at the Forks Market).

Note: if you’re under 18, you’ll need a parent to guardian to sign off. But, parents, don’t just sign off on the fun—join it! Go skateboarding WITH the kids! Say yes to new things. It’s good for your health!