Stronger Together: The Forks staff pull a plane for charity 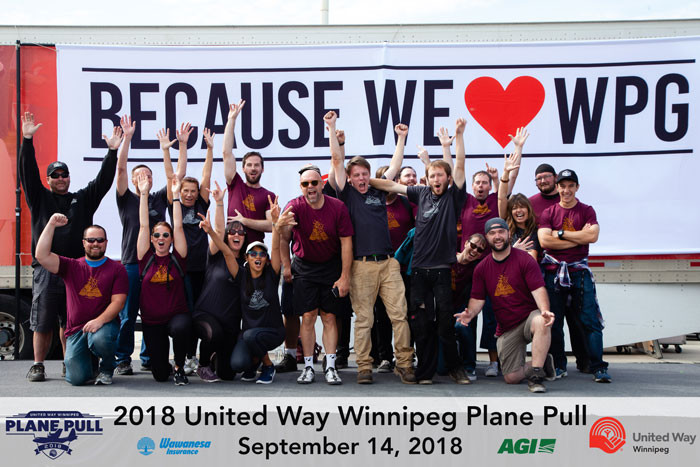 Last month, a few of The Forks team members participated in the United Way Plane Pull to kick off its $21 million fundraising campaign.

I was also there to take part and warm up the crowd of (gulp) 2,000 plane pullers with a mini dance party. As a new-ish member to The Forks team, it was great to meet a bunch of the folks that work on The Forks site every day.

In many ways, The Forks is its own little city in the middle of downtown Winnipeg. So many people with so many cool jobs!

The site is large — so large that it requires a whole crew to maintain. Justin and his team, including plane pullers Andrew, Liam and Gage, work diligently to maintain the on-land skating trails for smooth skating so you don’t trip while taking that perfect selfie under the twinkly lights! They also take care of clearing all the snow on the site — no small task in a Winnipeg winter. And they help keep our Target Zero promise by collecting all compostable waste from our restaurants and lunch rooms around the site to become fertilizer in our BIOVATOR that they eventually use to fertilize our grass and orchards. This is the team that is also responsible for carefully placing the incredible Warming Huts out on the river every year!

There’s Chrystle who takes care of all things The Common. I’ve always loved the friendly, speedy service there. Don’t you think the bartenders there are the unofficial tour guides to Winnipeg? The bar top at The Common is THE PLACE to meet tourists. Those friendly bartenders? Chrystle hired all of them. She has an excellent “awesome-person” radar.

Last winter, Zachary spent many long days clearing the snow on the Red River Mutual Trail. Clear, scrape, repeat. With trails as long as we have, it's like painting the Golden Gate Bridge every day.

There’s Kerry, who you’ve likely seen riding around on his fat tire bike making sure that the 56 acres of land at The Forks site is in tip top shape. If you see him out and about, he is always ready to stop and chat. Also — he likes biking, a lot.

Then there’s Justin who, in the middle of a meeting last month in The Market, I saw swiftly catch a bird who had lost its way and release it outside. He was a very talented birdcatcher, but on ordinary days, he leads the crew who keep our 100-year-old Market building geothermally heated + cooled, change the lightbulbs, and ensure that everything else is functioning behind-the-scenes.

Now, none of this can happen without Naomi who keeps busy CEO Paul’s schedule running smoothly to lead the ship. Or Nympha and Kelly, who make sure that all these valuable people get paid. And this is only a handful of the talented and dedicated folks who work to make The Forks all it is!

The Forks is already a flurry of activities seven days a week, in all seasons. I loved getting to know all the people that make The Forks The Forks. I think it’s a pretty special place. I love being part of this team to create a vibrant public space for us all.

The Forks has been a proud supporter of the United Way, for over 10 years!