A berry good time to check out the Public Orchard 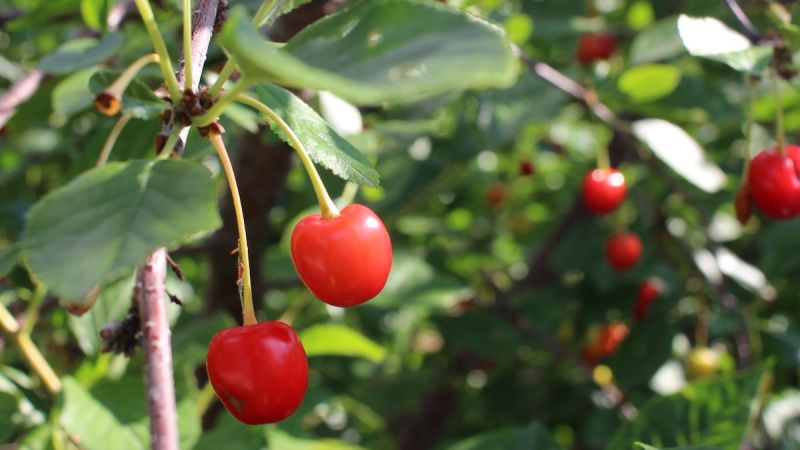 Six years ago, The Forks partnered with Winnipeg CORE to plant 61 fruit trees and around 75 fruit-bearing shrubs and bushes. Now, after years of growth, those trees and bushes have blossomed into a public orchard, producing delicious fruit available to be consumed by the public.

There are plums, apples, cherries, pears and a host of different berries, which are all coming into season and will soon be ready to be picked and eaten.

(There’s also a public garden, filled with herbs and veggies that are also open to the public to harvest and eat.)

Some of the varieties we've planted might not be ones you've heard of before, so here’s some information on a few lesser-known berries you can see (and taste) on your next walk through the public orchard.

Northline Saskatoon Berry: This berry is a deep purple-red colour, sort of a cross between a blueberry and a red grape in hue. Saskatoons, in general, are known for their sweet flavour with a hint of nuttiness, but the Northline variety are especially great for eating right off the bush or cooking (Saskatoon berry pie, anyone?)

Polaris Blueberry: This type of blueberry does well in the orchard because it’s a hearty plant that stands up well to the cold and ripens quite early in the season. Polaris blueberries have a beautiful, strong smell and are quite sweet and juicy. These berries make wonderful jams and jellies.

Tundra Honeyberry: A honeyberry bush is part of the honeysuckle family, except honeyberry bushes, as the name may lead you to believe, produce little blue berries rather than just a flower. Similar to a blueberry in look and taste, a honeyberry is blue in colour, though more oblong in shape. And honeyberries have a few health benefits as well: they are high in antioxidants, vitamins and minerals.

Red River Raspberry: The Red River Raspberry isn’t too different than your typical variety, except the berries on these bushes are large and in charge, and there are lots (and we mean LOTS) of them. These raspberries carry a strong flavour and are super juicy and should be ripe… well, just about now!

Russian Orange Sea Buckthorn: These stunning yellow-orange berries may be small in size but they are bursting with flavour (it’s sometimes referred to as the “Siberian pineapple” because of its juiciness and almost tropical taste!) Seabuckthorn has become a trendy ingredient for a lot of the world’s top chefs, so grab yourself a few berries and get creative in the kitchen.