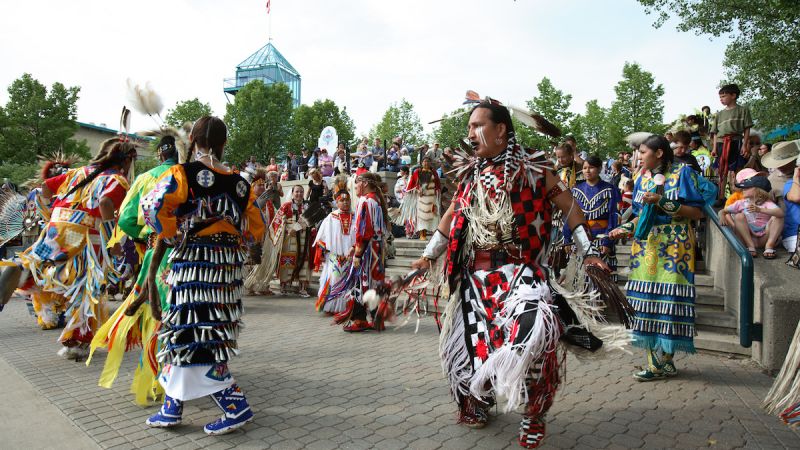 We are so lucky that numerous times a year, the members of our local Indigenous community gather at Oodena Celebration Circle to host pow wows where they sing, dance and celebrate their culture in a venue that is open to the public.

It’s a spiritual and beautiful event that is an integral part of the Indigenous culture, but for non-Indigenous folks, it can be hard to know how to participate in a respectful way if you don’t understand what is happening and why.

So we asked an expert to break things down for us: Traditional singer and drummer Ray “Coco” Stevenson.

The first thing Stevenson says to take note of when arriving at a pow wow is who is acting as the MC for the event. The MC will be the one guiding the pow wow and announcing what is coming up next, so this person will be a good one to keep an eye on throughout the pow wow.

“Every pow wow has an MC, and he’s the guy who gives all the direction to the people on what’s going to be taking place. Majority of the time it’s a man but you know what, in the last few years we have had a few lady MC’s who have tried it and are willing to learn and want to do it,” Stevenson points out.

Keep reading to learn more about the four key pillars of any pow wow and Stevenson’s suggestions on how be a respectful observer.

Up first is always the Grand Entry. During this beginning phase of the pow wow, all those who will be involved in the formal singing and dancing aspects of the pow wow will enter the circle/arena where it will be held in a specific order after the staffs and flags have been brought in: first come the dignitaries, then the royalty and then dancers. It is customary to stand throughout the Grand Entry, as it is for the following three parts.

Typically, an elder will share a prayer to bless the day. “Both the prayer and the Grand Entry are mandatory,” Stevenson adds.

Stevenson says the Veteran’s Song is sung for all the veterans who are here with us today and the ones who have either died on the battlefield or are no longer with us.

As a non-Indigenous person attending a pow wow, Stevenson says the best thing to do is ask questions and ask permission if you want to take any photos.

“Proper protocol for that would be to offer tobacco and ask if you can take a picture, a personal picture. Because some people will go there and take pictures and use them for advertisement, but you want to be able to approach someone as a tourist and follow that proper protocol, and if you don’t have tobacco, just ask! Tobacco is something that should be offered at each powwow we have,” he says.

If you want to learn more about pow wow etiquette, check out this previous blog post.

The final Founding Nations Pow Wow of the season takes place on Monday, Sept. 2; it’s free, it’s family-friendly, there will be an artisan market, dancing, singing and of course some drumming, so we hope you’ll put some of these pow wow-protocol tips to good use and check it out.

Other posts you may enjoy: