Once again the Warming Huts v.2014: An Art + Architecture Competition on Ice has been a huge success. This competition, endorsed by the Manitoba Association of Architects, invited architects from all over the world to submit proposals for warming huts online at www.warminghuts.com.

After receiving over 190 entries the jury blindly chose three submissions that best “push the envelope of design, craft and art.” This year the three winners are Canadian, with two of the winning entries coming from Toronto and one from Vancouver. In addition to the three winning open submissions, there will also be one hut from a separate University of Manitoba competition, one from the local invited architect Étienne Gaboury, and one hut from Kelvin High School’s drafting program.

Every year the architects push the boundaries in terms of inspiration, design, and materials used. There was no theme for this year's competition which produced a diverse set of winning warming huts.

Imagine a series of glowing mounds on the frozen river landscape, each creating immersive layers of light, warmth and interaction. Inspired by the insulating properties of fur, NUZZLES brings a unique, engaging experience to the visitors of the Assiniboine River. Moving away from the introverted enclosure, NUZZLES exhibits a heated, lit core, encompassed by a multitude of insulated appendages which allow users to nestle into the structure. Constructed from a geodesic lattice of hollow aluminum tubing, and an outer layer of foam bristles (pool noodles), NUZZLES provides an inner layer of still air in order to increase heat capacity. Occupants are encouraged to playfully interact with bristles in order to sculpt informal seating or standing space as well change the lighting dispersions of the glowing structure. 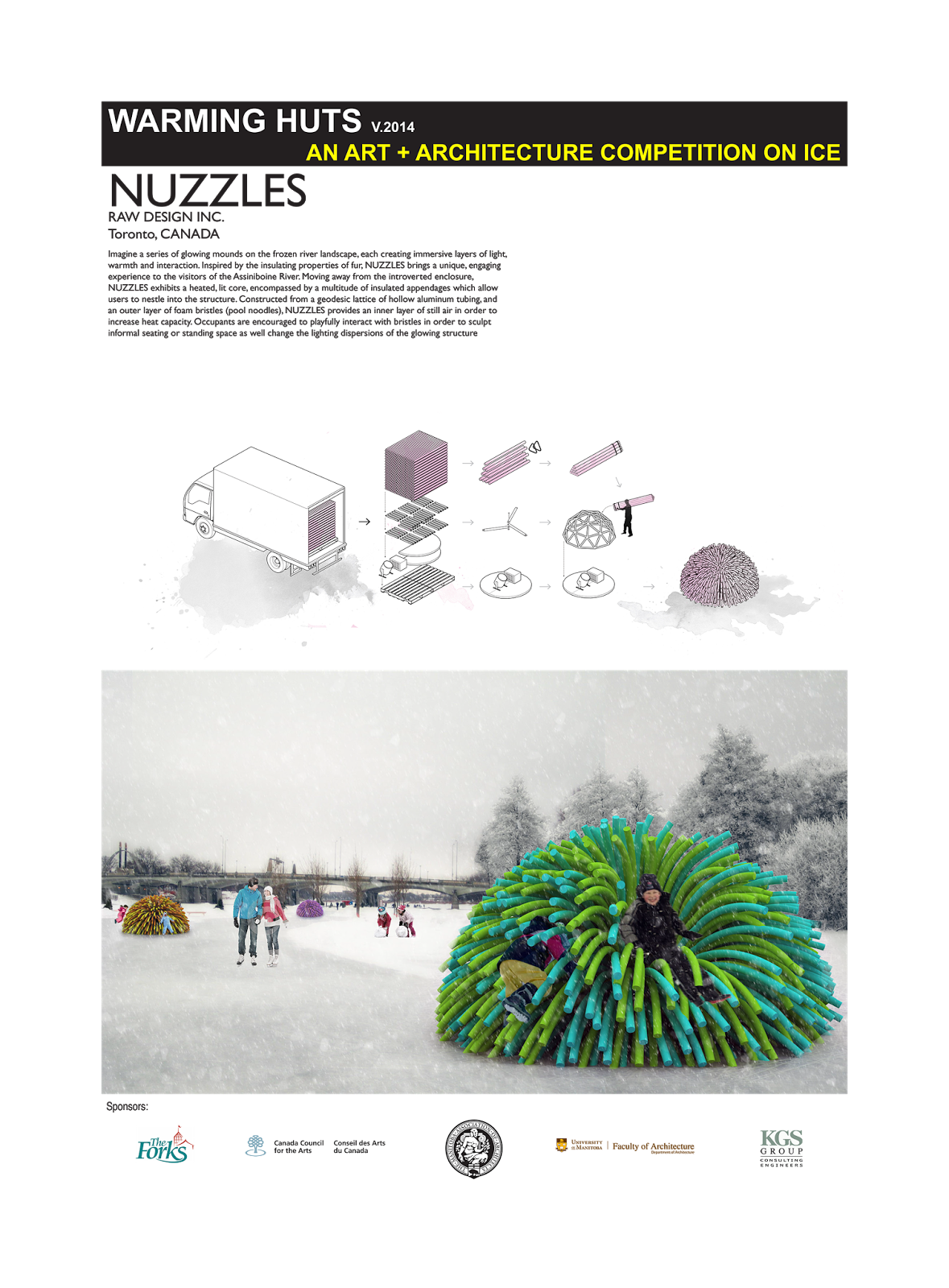 Red Blanket will be a visual marker against the surrounding white winter palette. It will be seen by skaters far in the distance. First as a red speck, then, as you skate closer, you will see the dense fabric panels swaying under heavy winds. The wall of thick felt will be angled to protect skaters from the prevailing wind and provide a sunny spot. Each of the ten panels is sized to be the width and length of a single roll of bright red felted wool. A rod will be affixed at each panel’s top end and hung in two parallel lines from the underside of one of the bridges crossing the Assiniboine or Red River. The bottom ends of these monumental- scaled panels will act as a warm blanket for people to wrap themselves in, one or two at a time. Simple wooden benches will be slid into place by skaters as required to create different groupings from a single person lacing up their skates to a small group gathering to share hot cocoa. 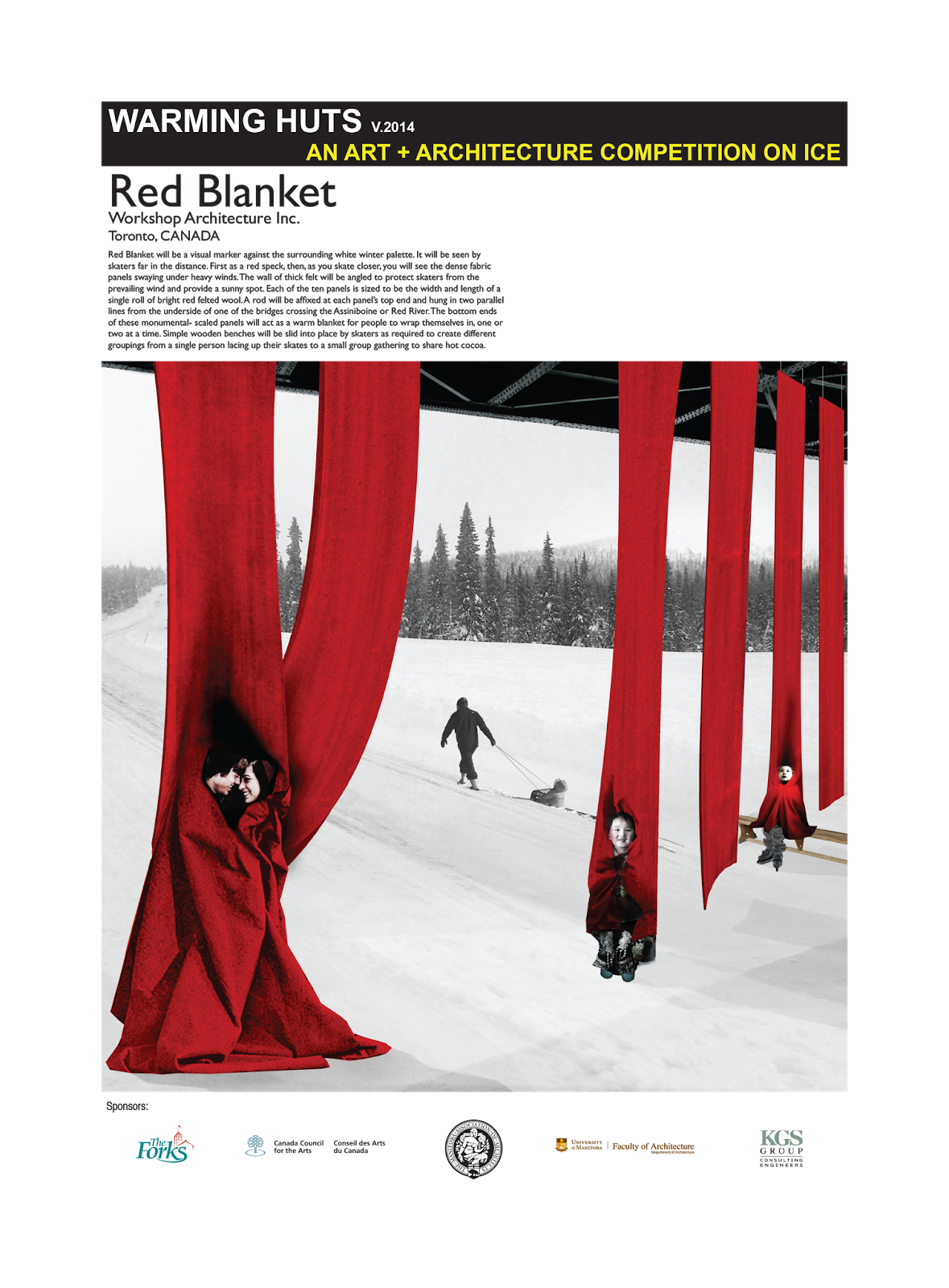 “And all about him was the wind now, a pervasive sighing through great emptiness, as though the prairie itself was breathing...” W.O. Mitchell

WINDSHIELD is a five-metre tall wind vane that counters prevailing winds to protect its occupants. The vertical shelter is supported on a circular rotating steel base. Its modern aluminum frame and fabric skin are based on the tectonics of the early birch-bark canoes that would travel down the Assiniboine in the summer months. The light frame allows the shelter to adapt to changing wind pattern by rotating to protect its users from exposure to the elements. Fixed to the centre of the circular base a modified outdoor heat column serves both as hand- hold and a source of heat and light. The shelter stands proud as a landmark feature along the frozen river, inviting new visitors to test its wind breaking abilities and warm their mittened hands. 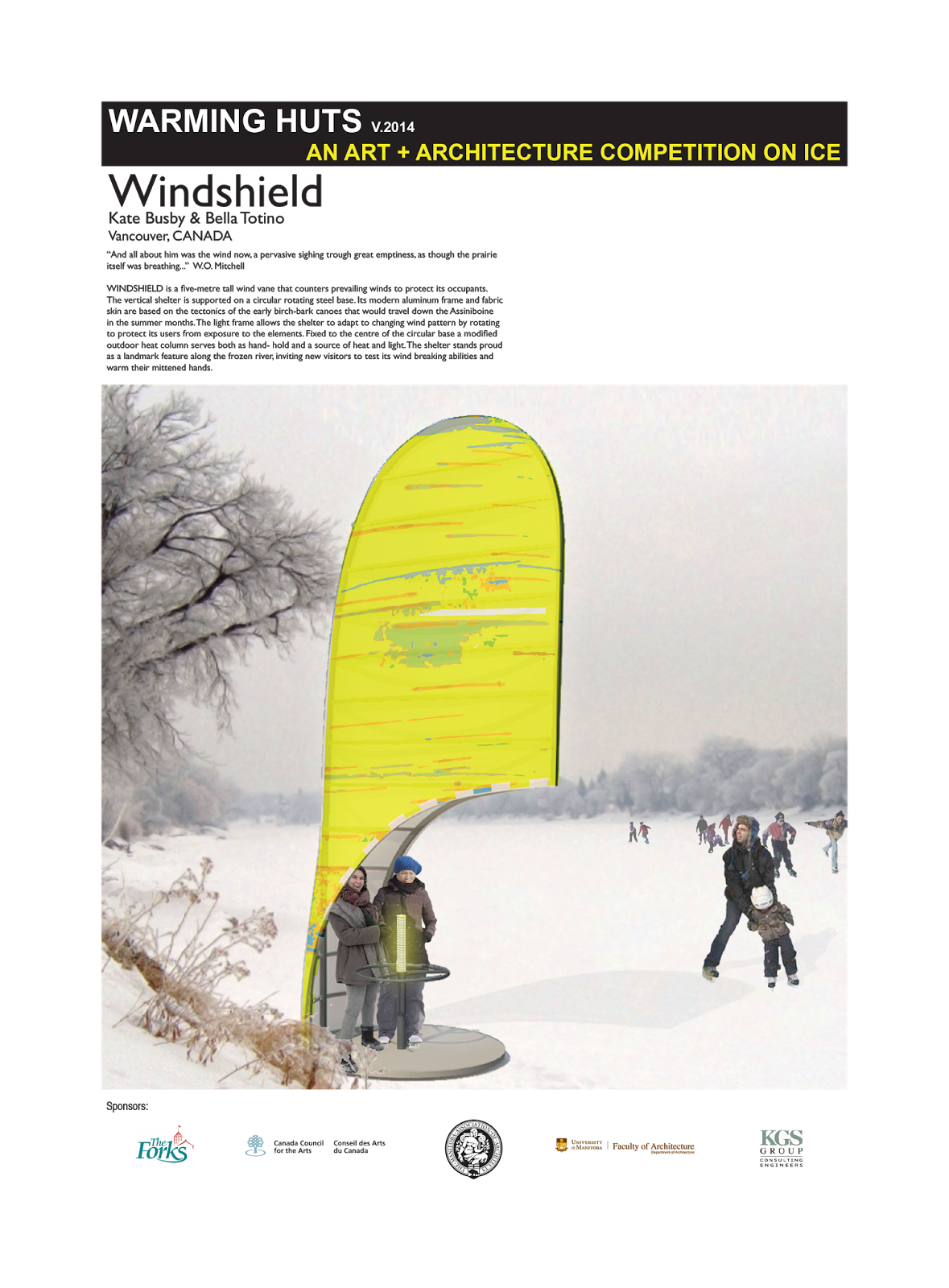 SKYBOX creates the visual immersion of people against a background not normally considered, the sky. Winnipeg’s trademark aspect is its winter weather, and SKYBOX aims to create a mesh between the transforming weather conditions and the community. Purposefully placed reflective material covers the interior space to procure an illusion of the visitors sitting amongst the changing winter skies.

SKYBOX embraces the current generation’s fascination with social media by creating a photographic opportunity amongst the changing skies. Through the process of uploading images with the tagline #SKYBOX, Winnipeg’s community can interact with and promote The Fork’s Red River Mutual Trail on an international scale. 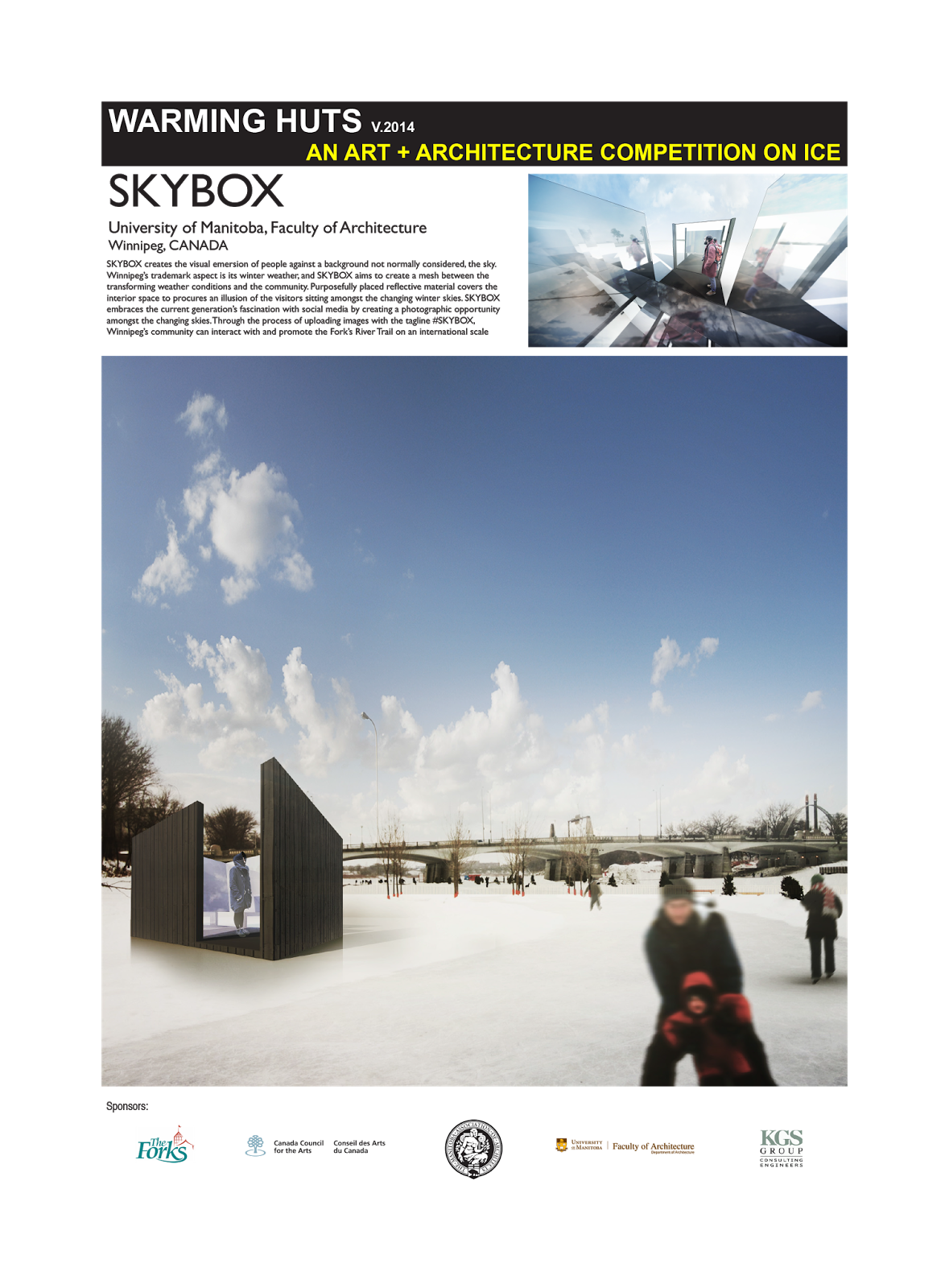 This warming hut celebrates the 45th season of the Festival du Voyageur; it is a mirthful evocation of the ‘courreurs de bois’. They relied primarily on clothes to warm themselves, wearing probably one or two pairs of pants, ‘long johns’, sweaters, toques, woolen socks, moccasins, and sashes wrapped around their waists. Recalling these habits and traditions are the inverted pants and sash. These are suspended by two helium-filled balloons; the lower one, a voyageur carrying a canoe, and the upper one, a floral form, all meant to create a festive setting visible from afar. 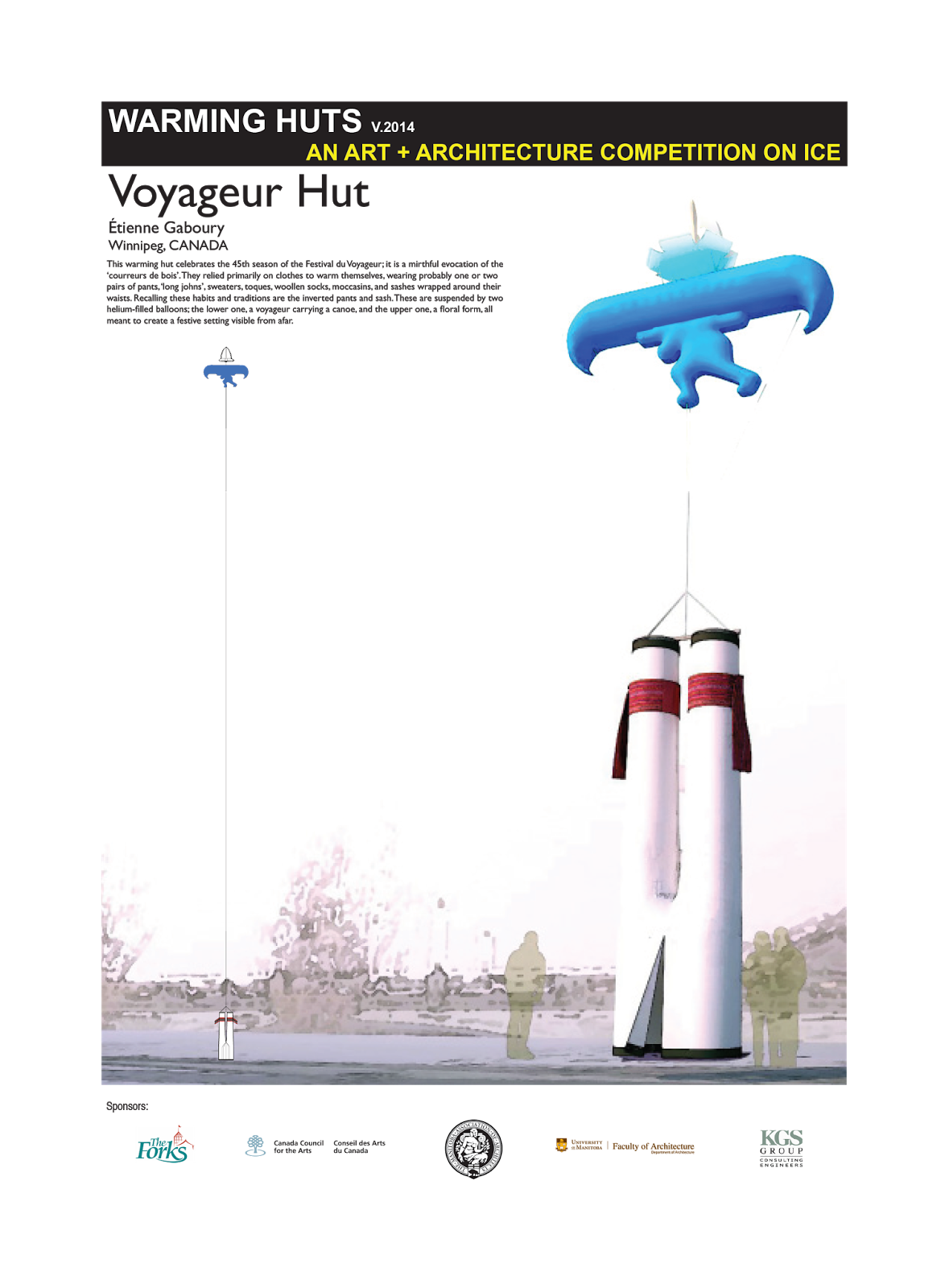 Working with Red River Mutual, the sixth warming hut will become a class project for Kelvin High School Students to be unveiled during build week in January.