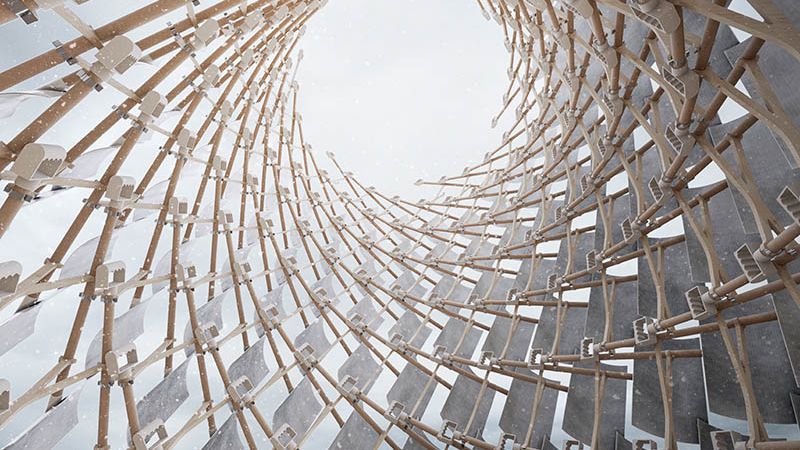 There's no denying it any longer — winter is here and it's here to STAY. But if you're anything like us, you've been ready for this for a while because you're excited for another year of skating, crokicurl and... Warming Huts!

This year, the competition attracted nearly 200 submissions from 32 different countries! All submissions were reviewed by a “blind” jury, meaning they have no background information on who submitted the designs or where they are from. The jury, consisting of experts in both the arts and architecture worlds, chose three winning huts:

The Droombok is a fantastic creature living along the River Trail in Winnipeg. We created a space in which the surrounding nature finds its way inside. Thanks to its bestial outline and its scale, the structure’s relation with its context, is in constant change: the sun produces a layer of moving shadows, breezes enter freely and the snow is softly reflecting the environment on its (thatch) fur. As we get closer to it, other modes of reading emerge. Inside its belly, a landscape of white sculptures appears. Each form can be interpreted in various ways and spurs the imagination. Made out of environmental friendly materials, this architecture tries to interrogate the potential of myths and stories in a sustainable process.

Warmth comes from being together. Enjoying time with other people is something we do less and less, because of the daily hectic. Let’s gather at this natural place, spend time and listen to each other. It is warm and silent inside the huts made out of straw.

Communities are diverse, so are the shapes of the huts. Sit together with friends, climb into the huts, meet new people. All this while experiencing the warmth of the huts and the smell of straw. Reconnect with nature and people again.

Conceived as a small shelter or hovel, S(hovel) reimagines an everyday, off-the-shelf article of winter – the snow shovel – into a swirling vortex of mystery and intrigue that only reveals its true identity upon closer inspection and inhabitation. Built from 194 aluminum shovels, 195 custom milled plywood ‘X’ and ‘Y’ struts and 735 clamps, we challenged ourselves to design a warming hut that could be built and subsequently disassembled using unskilled labour furnished with only a wrench and a hand drill!

Designed for disassembly, S(hovel) is destined for a philanthropic afterlife in which, following its stint as a Warming Hut, the 194 shovels would be donated to Take Pride Winnipeg’s Snow Angel Program, a non-profit charity that helps seniors and the infirm with snow removal each year. This circular life-cycle enables S(hovel) to infiltrate the larger community of Winnipeg, enticing the multiple narratives of winter’s spectacle to unfold.

Adding to the winning designs, there will also be additional huts coming from Manitoba Building Trades (pictured above) and the University of Manitoba Faculty of Architecture, which also supports the Warming Huts competition.

And, seeing as we'll be celebrating Manitoba 150 in 2020, it was only right that this year's invited artist be local. This year's invited artist is local act Royal Canoe, who will be working with internationally renowned ice architect Luca Roncoroni and Sputnik Architecture to create instruments out of ice and put on an especially "cool" outdoor performance on January 31 at The Forks.

Look for construction on this year's winning designs to start in early January and keep an eye out for a few favourite huts from years past making their way back on-site!