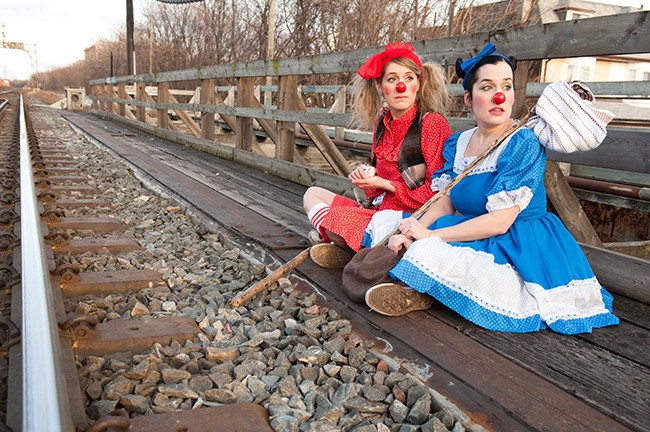 As a father of three young girls, MTYP Artistic Director Pablo Felices-Luna knows a thing or two about what entertains young audiences.

“I know never to underestimate the audience,” he says_. “And yet, we always do. My daughters always surprise me by picking up on things I thought might have been too dense or obscure, at which point I have to go and give myself a kick in the pants for having assumed they wouldn’t. I want to experience theatre with the same openness and to be moved and delighted as they do.”_

To that end, Felices-Luna has programmed a very fun season for his third at MTYP. It opens with Circus Incognitus (October 20-29), a one-man show where performer Jamie Adkins does everything the hard way. The show will appeal to audiences ages 3 plus.

“I take as much pleasure from everything going wrong as when it goes right,” says Adkins, who grew up in San Diego but lives in Montreal. “For example, when I was a juggler if I dropped a ball and it went into the audience it was a tragedy, but as a clown if I’m juggling and I drop a ball and it goes into the audience it’s an opportunity! I wait for the audience to decide what to do. If they throw the ball to me I can play with that. If they keep it, great! I can play with that and go into the audience and we’ll see what happens. We can get back to the juggling routine after we explore this new fun thing happening.”

Of Mice and Morro and Jasp

Next up are clown sisters Amy Lee and Heather Annis in Of Mice and Morro and Jasp. In this hilarious adaption of John Steinbeck’s classic, Of Mice and Men, the two clowns feel the pinch of the economic downturn and decide to make ends meet by creating a new play. The desperate clowns try everything they can think of to stick to the story, but will they make it out alive?

“We wanted to take a classic male story and make it about women,” says Lee, who is a Winnipegger who grew up taking classes at MTYP from the age of six. The clown duo are Fringe veterans and most recently performed at the Sarasvati’s FemFest. Of Mice and Morro and Jasp is for teenagers and adults, some of whom may even find themselves onstage.

For the holidays, MTYP presents A Charlie Brown Double Bill featuring You’re a Good Man, Charlie Brown and A Charlie Brown Christmas from December 8 to 30. In the first act, Charlie Brown tries to muster up the courage to talk to the Little Red-Haired Girl and in the second, he cannot get into Christmas and turns it around with the help of his friends.

These shows are a perfect way for fans of the Peanuts gang (and who isn’t?) to introduce their children or grandchildren to a bit of childhood nostalgia.

“The Peanuts stories are coming back into our consciousness so they are not as foreign to young children as they might have been five years ago,” says Felices-Luna, who will direct the show. “There’s so much to love about this piece: the enduring quality of those characters, the sweetness and hilarity of their interactions, the sheer goofiness of doing a musical in the round, the beauty of snow… I could go on forever. I also love taking an iconic story and reframing it for kids and families in 2017.”

MTYP’s season will continue in 2018 with four more shows. Manitoba Theatre for Young People is located at 2 Forks Market Road. For tickets to any of the above, call 204.942.8898 or buy online.