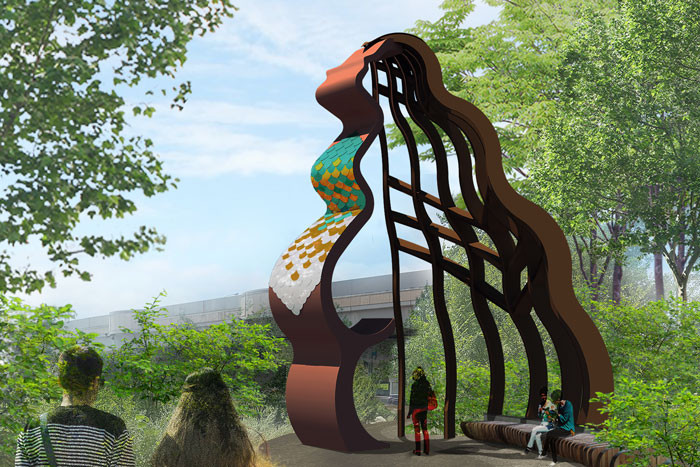 In case you missed it, the South Point has been officially named Niizhoziibean (phonetically pronounced Nee-zho-zhi-been) to honour our city’s Indigenous heritage and its prominent place alongside the Red and Assiniboine Rivers.

“South Point is the southernmost point of the area known collectively as The Forks, where the two rivers bring people from three directions to meet at the confluence,” said Project Advisor Niigaan Sinclair, Associate Professor Dept. of Native Studies, University of Manitoba. “Niizhoziibean, meaning two rivers in Ojibway, honours the part that the Red and Assiniboine played historically."

Elders, Clarence and Barbara Nepinak, uncovered the name during a traditional naming ceremony in August.

“Nowadays, we are re-discovering the original names of our home. Some have names we can find carried by elders or we can find in archival documents. Some we ask for from living people today,” said Sinclair. “In early 2018 elders Clarence and Barbara Nepinak were offered asemaa (tobacco) to uncover the name for the South Point path.”

“Niizhoziibean not only embodies the spirit of the traditional past of The Forks but enhances our understanding of what this place means – a collaborative space where people have been coming together to trade, grow, and make life for millennia,” said Sinclair.

$1.2 million of improvements to the pathway are currently underway and will include a signature sculptural piece to be installed as a landmark and visual enhancement of the pedestrian entrance to the site from Queen Elizabeth Way.

The striking 30-foot sculptural piece will welcome visitors once they enter the site from Main Street. The piece refers to the power, love, and connection we share with our parents and where we come from.

“This redevelopment honours the history of this space and gives it new life,” said Dan Vandal, Member of Parliament, Saint Boniface–Saint Vital. “Its name and accompanying artwork will pay tribute to our founding nations and help us reflect on our shared path ahead.”

“The Winnipeg Foundation – through its Green Spaces Strategy – is thrilled to be part of this important development in our city,” said Richard Frost, CEO of The Winnipeg Foundation. “The rich Indigenous history of Niizhoziibean will further enhance an area that is special to all Winnipeggers. Along with the St. Boniface Belvedere, this complete loop will be a jewel in our downtown.”

“The Forks continues to be one Winnipeg’s busiest destinations and gathering places,” said Mayor Brian Bowman. “This enhancement work will further celebrate The Forks’ unique history, our city’s Indigenous heritage, improve pedestrian connectivity, and help make The Forks an even more attractive destination for visitors to our city as well as our own residents.”

“This announcement is very exciting as it builds on the 2.5 km loop which includes the Promenade Taché Enhancement and Belvedere project. The development of Niizhoziibean which will celebrate the rich Indigenous history of the area is paramount to completing this walk,” said Norm Gousseau, CEO, Entreprises Riel.