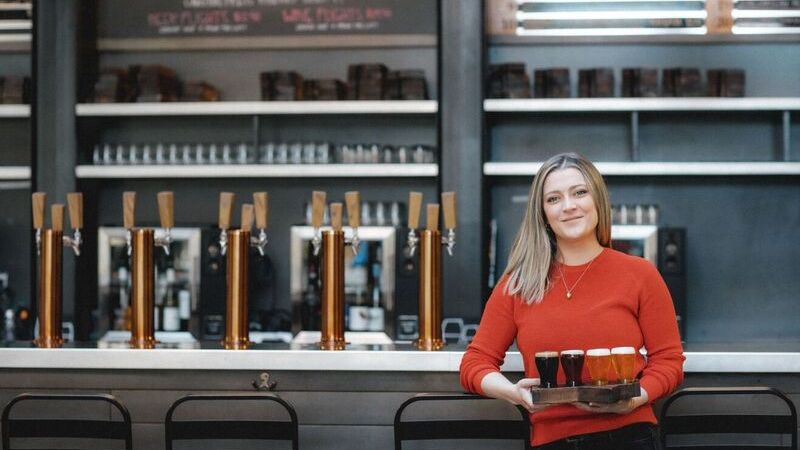 You’ve been sipping her selections since January, so it’s definitely time we introduce you to Lauren Richard, our new Cicerone for The Common. She’ll be curating your sips for the next year or so.

If you’ve ever wondered how we get such a unique and diverse beer list at The Forks, it’s because we always have a skilled Cicerone seeking out a range of local beers and those from around the world to bring to visitors.

Lauren’s been keeping busy curating the rotating list of 22 taps at one of Winnipeg’s favourite meetings spots, and we’re so excited to be able to tap into her expertise! See what we did there… 😉

A certified Advanced Cicerone® from Fredericton, New Brunswick, who has called Toronto home for the past 15 years, Lauren has worked as a bartender, bar manager, brewery worker, and brand manager. She's been able to see all sides of Canada’s craft beer industry and help it grow. Over her years as a beer "sommelier", Lauren specialized in menu curation, beer and food pairing, staff training, guided tastings, and festival education.

Side bar: What’s an Advanced Cicerone®? It’s the third level of certification in the Cicerone® Certification Program. It requires a solid understanding and distinctive expertise of beer, as well as an excellent ability to detect and describe beer flavours.

Lauren’s approach to curating a 22-tap beer menu? Diversity in styles, ingredients, and location of origin.

“As well as showcasing the local industry, I’m trying to acquire something from every province-- and even the territories, if possible -- finding the best US imports, and bringing in classics and new flavours from overseas,” says Lauren. “It’s a priority to always make sure that there’s a beer on there for everyone’s tastes, and not focus too heavily on one trend or style.”

“The most exciting thing would be the freedom to be creative in my decisions. My work as an independent consultant takes me across Canada and the US sampling beer, and it’s so exciting to carry something you know is going to knock people’s socks off – and even change their mind about what beer can be. The most challenging thing would be the logistics of importing. While it’s challenging, it’s great to see The Forks’ commitment to bringing the world to its visitors.

Lauren also homebrews and won the Canadian episode of Vice's Beerland in 2018, competing as the only solo brewer, the only Canadian, and the only non-male contestant. Lauren is a BJCP judge, as well as a long-standing judge for the World Beer Awards and the upcoming Canadian Beer Cup.

When not working on beer lists, you can find Lauren singing in her country western band, The Shortcans, recording children's animation as a voice over artist, or pulling pints at Godspeed Brewery in Toronto.

Did you know you can find Lauren’s beer list on our website? Check it out here! Look for seasonal changes and rotating local taps throughout the year.

The Common is open daily.
Hours vary depending on weather conditions and business levels.