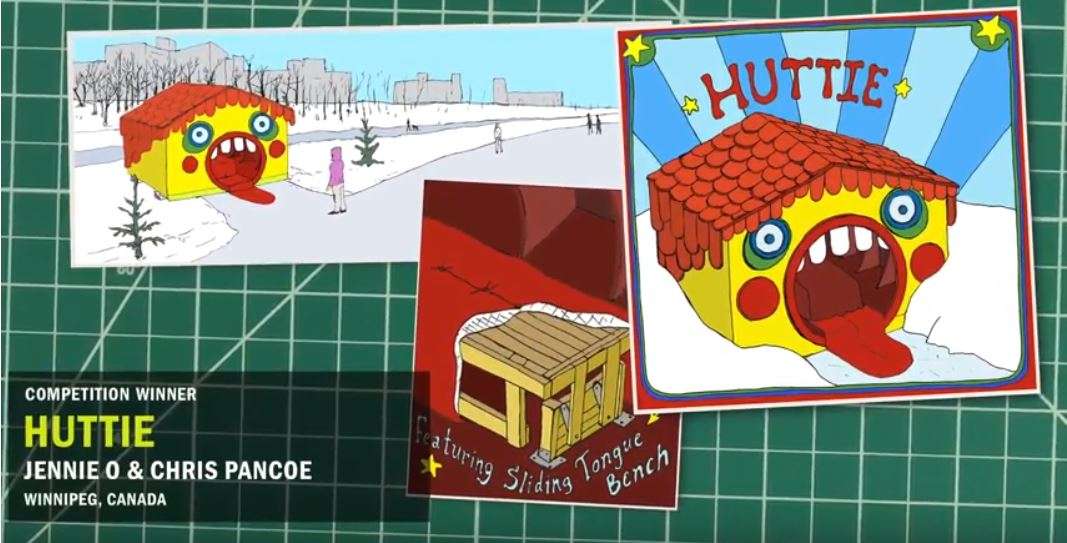 Last week we found out just how excited we need to be for the upcoming winter season at The Forks. Hint: it's VERY EXCITED.

Its been ten years of the Warming Huts competition, and to celebrate, we're going to see a real flurry of activity on the Red River Mutual Trail this year, complete with instruments made from Red River ice, a performer all the way from Norway, an entire venue for these performances to take place (complete with an ice bar!), and helping it all happen, a brand new sponsor, Artis REIT.

Terje Isungset is an ice musician. He makes music with chimes, xylophones and horns made of ice, and will be performing for those who brave the cold temps, and also in a special performace with WSO's Winnipeg New Music Festival, at Pavilion Sub-Zero, right in the Forks Historic Port.

Pavilion Sub-Zero will be the hub of all kinds of festivity throughout the winter months. The venue, specially designed for Warming Huts v.2019 will feature performances and other activity, in partnership with Festival du Voyageur.

Not to mention three very cool (see what we did there), brand new Warming Huts that will be hitting the Red River Mutual Trail by the end of January. We saw a record 219 submissions from more than 30 countries - many that have never experienced a flake of snow before.

A large white box hovers over the ice; in the box, there a peoplewalk about, bide their time, or seemingly hover over the floor. What is happening? The visitor enters a labyrinth turned upside down by way of one of the two narrow openings leading inward. Corridors snake through the body of the building and end at benches. The visitor wanders around, optically cut off from the outside world, disoriented, and only perceives the legs and feet of other visitors. Sudden encounters bring strangers together, secret visual contacts through holes in the walls next to the benches invite visitors to spy on their surroundings, difficult to recognize. A play involving distance and proximity.

Huttie is Winnipeg’s anthropomorphic warming hut destined to delight both the young and old. Inspired by the retro cult children’s T.V. series H.R. Pufnstuf, river trail visitors will be transported into Huttie’s technicolor splendor. Once inside, visitors are encouraged to relax and seek warmth on a plush gliding tongue while taking in the psychedelic cascading interior on its mouth. Huttie - it’s your friend when the weather’s rough!

Weatherman is a series of interactive art sculptures mimicking familiar man-made massing around the scenery along the Red River Mutual Trail - Snowman. The scale of weathermen varies from 5 feet tall non-occupiable objects to 10 feet tall pavilions with hollow structure inside, which can be occupied by people and function as warming huts. Composed of sculpted and stacked insulation foams inside and plaster coating outside, weathermen are painted in various colors in warm tone palette. Introduction of warming palette of color in barren, frigid environment enlivens the site with visual and physical presence of warming huts. “Weathermen” are laid out in a simple 4 x 4 grid where they are all positioned on same ground elevation at the beginning of the installation. As snow piles up around the installation during winter storms, visitors can speculate amount of precipitation by using weathermen as a measuring tool with familiar human scale. Strategically placed mundane objects recreated in unexpected scale and color can bring out curiosity and resurface one’s childhood winter memories. “Weathermen” aims to become a colorful warming hut invoking visitors’ past memories and creating new ones simultaneously.

In addition to the competition winners and invited artist, visitors to the Red River Mutual Trail will also notice an installation by the Winnipeg Art Gallery, designed by the WAG Inuit Art Centre architect, Michael Maltzan Architecture from Los Angeles, USA.

In celebration of the future WAG Inuit Art Centre, Michael Maltzan Architecture (MMA)’s design for the Warming Huts v.2019 is a family of carved forms that are as dynamic in their sculptural shape as they are in the negative space created between them. The huts are constructed as a kind of snow “topiary”, varying in height and diameter. Created from snow and ice, they integrate and are created from their environment. The glow of the light coming from within their walls can be seen from outside, transforming the huts into beacons of warmth and safety for the community of Winnipeg. MMA is the architecture studio selected to design the WAG Inuit Art Centre, opening in 2020.

There you have it, folks. Stock up on wool socks - we're going to be spending a lot of time outdoors this winter!

PS: Take a peek at this great Warming Huts video.