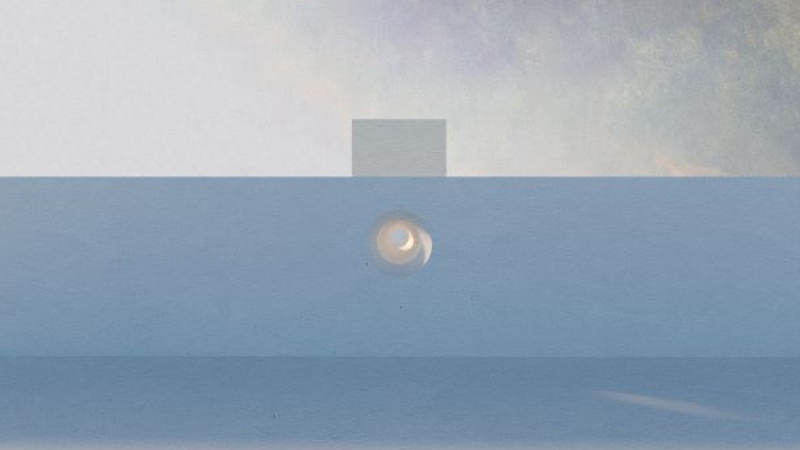 It’s beginning to look at lot like winter… and that means river trail season and warming huts are just around the corner. Warming Huts v.2023: An Arts + Architecture Competition on Ice received 122 submissions from 33 countries – and you can expect to see six innovative new designs join old favourites out on the Nestaweya River Trail presented by The Winnipeg Foundation and around The Forks site this winter.

Check out the starting line-up for Warming Huts v.2023! Designs for the six new warming huts that will be warming hearts on the Nestaweya River Trail this year have been unveiled. 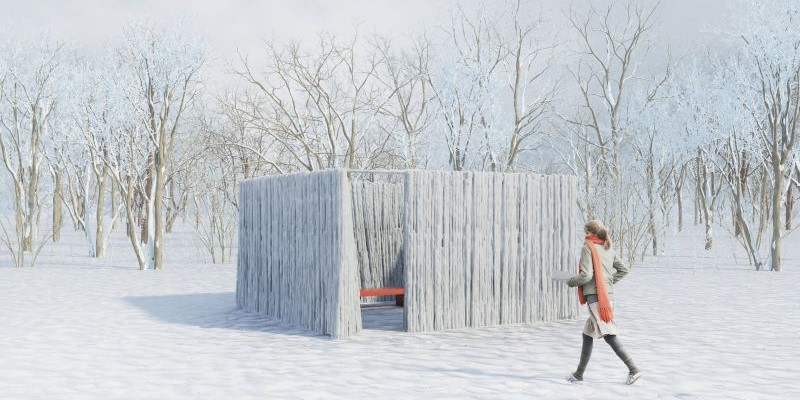 The design aims to take advantage of the main potentials offered by the site, water and freezing temperatures. A curtain of ice, like a frozen waterfall, defines an enclosed space that protects visitors from the cold wind. A simple framework made of timber and biodegradable ropes will gain mass through the deliberate addition of river water that gradually freezes, accumulating along the guides established by the ropes. Without the ice, the framework alone would not be a shelter. Without the framework, the ice would not take its form. The shelter will be in constant change, gaining mass with precipitation, and becoming thinner and more translucent as it melts back into the river in the spring. In this sense, it will be a record of this particular winter's weather, a subtle reminder of the fragility of our climate as well as a hint of the many possibilities that working together with nature can offer us. 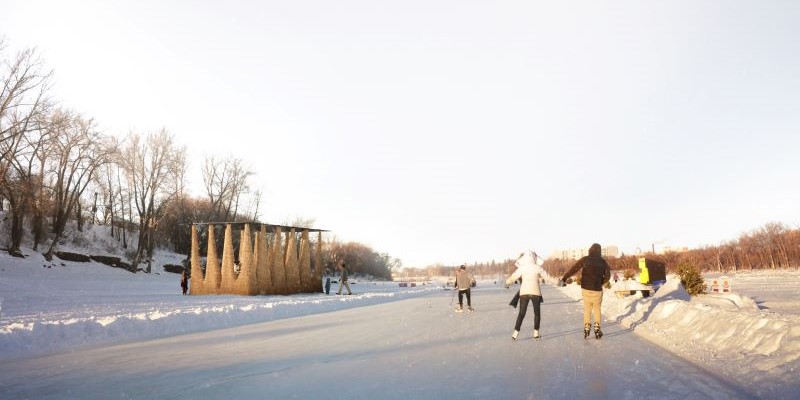 Hayspace is a small shelter made of hay and string and metal and wood. Its sculptural form, generated by the wrapping of twine around hay around a simple structural frame, recalls the cylindrical haybales which dot the prairie landscape. Tapering columns are spaced far enough apart to allow the visitor to step inside comfortably, however they are spaced close enough together such that they might just brush their shoulder against the hay as they enter. A stray piece of straw might come loose from the column, falling down to the floor. Are the hay columns emerging from the loose hay piled on the floor or is this hay floor spilling out from the tightly wound hay columns above? Once inside, the visitor takes a small step down into a soft basin filled with loose hay, where they might sit, lie down, pause to breathe in its smell, notice the low winter light playing against the wrapped columns, or glimpse their own reflection in the ceiling. 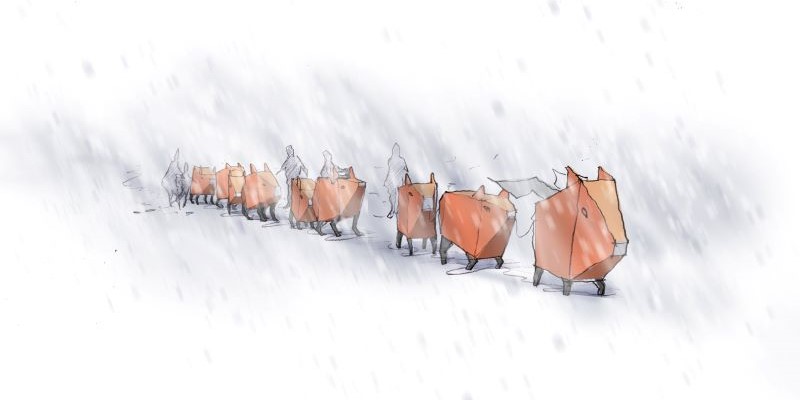 A migrating hyperborean herd looking for a place to settle,
each step imprinted with shiver and struggle.
Destination not in sight; the path filled with mud and snow.
The desire to reach some unknown destination burning beneath our skin;
A surreal and untouchable dream.
We march, biting our lips, hoping for a better tomorrow.
But our destination will be another departure point,
Another variable.
In the end, we are the still point, the only constant.
The journey, itself the shelter, our incandescent home. 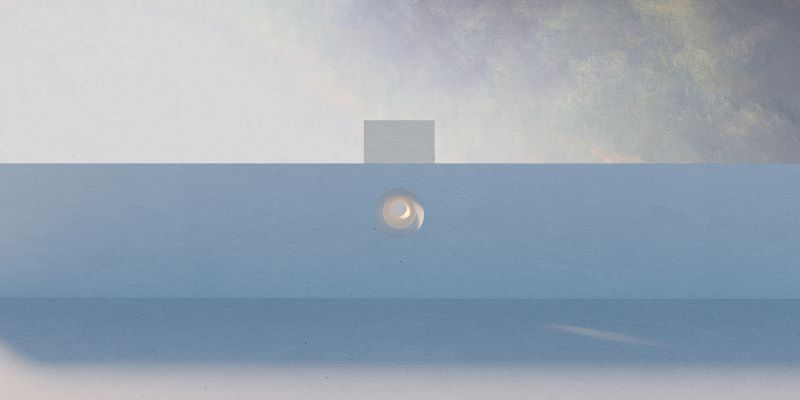 NIX is an open-air gallery that brings art and design to the general public in the severe winter setting that is so renowned and embraced by Winnipeg. As the world finds new ways to gather in public, NIX (Latin for ‘snow’) is a space to pause and reflect in a time where the transportive quality of art and architecture matters more than ever.

NIX takes its influence from Wanda Koop’s painted images, and like much of her work, features long views and landscapes, alight with reflection and moments in space. Evolving as a collaboration with architect and designer Thom Fougere, carefully positioned portholes of carved snow emphasize the passing of light across the sculpture and frame frozen vistas, a ‘looking through’ that both situates the viewer and expands one’s sense of the snow-scape beyond. 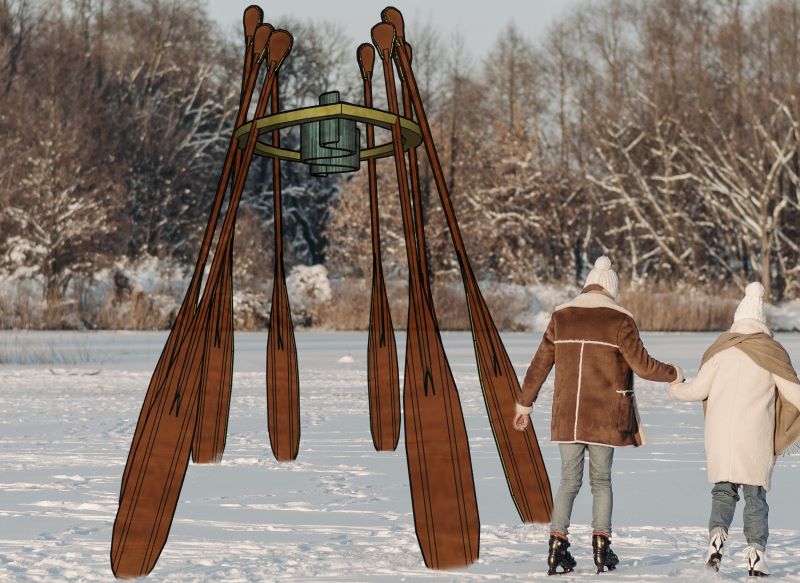 The canoe and paddle - once used as tools for survival and exploration; then commerce and colonization; and lastly as recreation and leisure.

Today, we must paddle backwards.

Azhe'o was constructed with the purpose of exploring the history of the canoe and paddle from their inception.

Throughout this land we now call Canada, Indigenous peoples once designed and built canoes, contributing the resiliency required to adapt to the diverse conditions each nation faced. As they traversed the lands and waterways, the canoe was a necessity for their prosperity and strength. The paddle served as a canvas for expression, a rite of passage for the youth, and as a connection to the earth.

Flowing Lands
By The Faculty of Architecture, University of Manitoba
Winnipeg, Canada 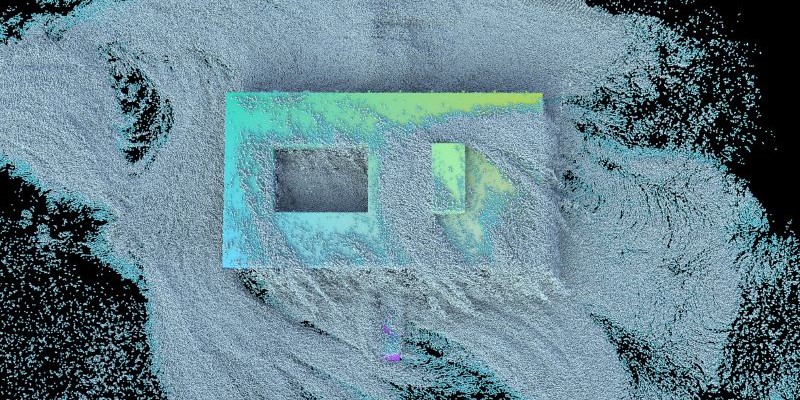 The Prairies are awash in fluid motion. From the winter sky comes dancing snow. Blowing, building and aggregating towards a collective whole. Only to find each one of its tiny particles, bound to the act of sublimation, transpiration and evaporation. These acts of phase change happen across Turtle Island. Though in the Nelson River watershed, where the intersection of the Assiniboine and Red River wrap themselves into one body, the fluid dynamics of the land is particularly potent.

Flowing forces run across the land, dance and spin in the wind. With forces so enigmatic in their motion, is there a way to design with these fluid fluctuations? Is it possible to visually map the forces and shift the processes of erosion or aggregation towards formal material bodies? We propose the 2023 Faculty of Architecture Warming Hut act as a staging ground for the physical collection and intentional shaping of a snow-scape.

As long as Mother Nature permits, the new huts will be placed on both the Nestaweya River Trail and in Arctic Glacier Winter Park along with returning huts from years past following 2023 Build Week at the end of January.

Anyone else just, SO excited for winter right now???