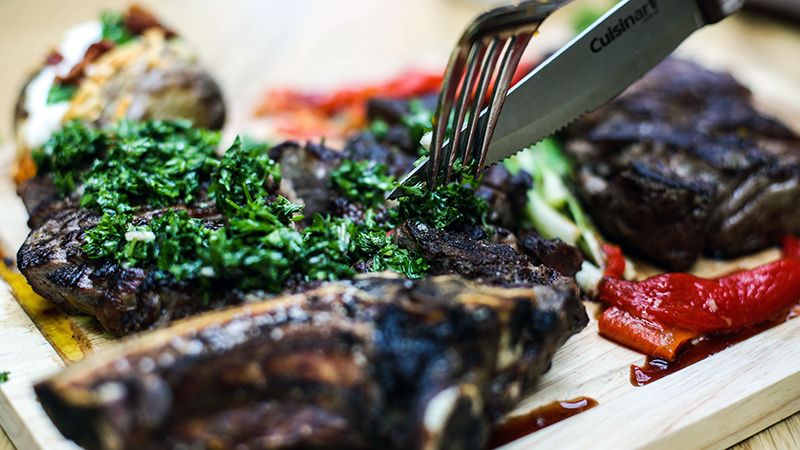 You may notice some new smells wafting through the food hall these days, and that’s because our pals over at Simon's Cuisine have switched things up with a new name and a new menu to match!

As of Mar. 4, the restaurant is now called Simon’s Steaks and the menu, as you may have guessed, is full of classic steakhouse favourites, some with an Argentine twist.

Chef José Sturym hails from Tucuman, Argentina, where he began his culinary career. He owned and operated multiple cantinas there in the ‘90s, but after a 2001 trip to Winnipeg to visit family, he felt there were more opportunities here, so he and his family made the 9,000 km move to our fair city in 2003.

In 2004, he started up Simon’s Cuisine in St. Vital, an Argentinian restaurant which quickly became a favourite for many in the area and all over the city. (Fun fact: Simon is actually chef Sturym’s middle name!)

Simon’s Cuisine remained at that location until 2015, and then moved into The Forks Market’s food hall in 2016 under the name Epanadas + Co., where they have been dishing up delicious empandas and other tasty bites since.

And for those empanada enthusiasts out there, don’t fret! A selection of the most popular ones will still be available, but they are now accompanied by a menu that will satisfy any meat-lover’s cravings.

Chef Sturym and his team have selected several different high-quality cuts of beef for grilling — including ribeye, New York strip, beef tenderloin, sirloin and more — which they only season with coarse salt and do not marinate so the natural flavour of the meat shines through.

There are also a handful of chicken dishes, if beef isn’t your thing. Definitely give their take on a chicken Philly sandwich a try! Can’t go wrong with melted cheese, chicken, veggies and a garlic aoili.

And if you’re not salivating yet, just wait until you see the side dishes.

You’ve got your traditional bffs of grilled steak, like a fully loaded baked potato, fries, onion rings and salads. But there’s also some Simon’s-only offerings such as a creamed spinach with ricotta that will blow your mind, and, of course, those empanadas you already know and love.

You can find the entire new menu at Simon’s new website, or by visiting them in person in the food hall!