Soul of The Forks

During a family visit this past summer my aunt, a former antique shop owner and now an aspiring poet, story teller and writer, recalled how she always enjoyed “the shops in those old warehouse buildings” at The Forks.

And so, on our way to the site this summer I decided to give her a different view of The Forks. We parked the car beside the Basilica in St. Boniface and walked across the Esplanade Riel pedestrian bridge. Needless to say she was quite surprised to see the iconic architecture of the “new” bridge and the CanadianMuseum for Human Rights. 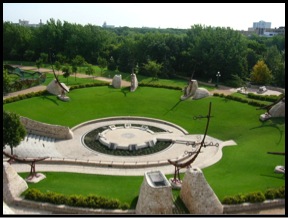 We strolled along the riverbank pathway through the national historic site and behind the Children’s Museum before stopping at the grassy bowl amphitheatre known as Oodena (Ojibwe for “heart of the community”).

I told my aunt that a local architect (Gary Hilderman) was commissioned to design this space as a “spiritual heart” within the hustle and bustle of The Forks. The concave space recalls the ancient ties between early humans and their environment as the three meter deep excavation unearths the ground Aboriginal people walked upon 3000 years ago. Oodena acts as a naked eye observatory. Its steel armatures mounted on the cobblestone monoliths define precise sight lines for visitors to view specific stars. Stories and images from various cultures are presented on interpretive panels and sandblasted into the monoliths.

With seating around the grassy bowl this is a special place for Aboriginal and cultural celebrations (not to mention a popular spot for sunbathing). Live plays, storytelling and some great musical performances, including John Hammond Jr. and the Blind Boys of Alabama, have taken place here! 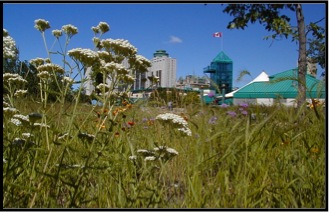 Next to Oodena is The Forks Prairie Garden in full bloom. My aunt does a fair bit of gardening and was quite impressed with the naturally wild garden with over 150 plant species, including prairie plants such as prairie crocus, wild iris and purple prairie clover. I explained that the garden was actually above an archaeological preserve. After people had camped here thousands of years ago, the evidence of their campsites would be covered by mud from one of the many floods that took place at The Forks, preserving the artifacts beneath the new soil.

The first peoples were bison hunters. Two 6000 year old hearths (camp fires) discovered near the Forks Market containing catfish remains and flakes from making stone tools are the earliest evidence that people camped at The Forks. The hearths were uncovered at a depth of 20 ft.

At the Prairie Garden location a 3000 year old campsite and trading centre was discovered 10 feet below the surface. The different styles of arrowheads confirm that people from the north, the plains, and the west met at The Forks.

The Forks was continually visited by different Aboriginal groups. They had many varied ways of life – prairie people hunted bison, fished and farmed; people of the forests relied on moose, fish and wild rice; and people from the Great Lakes area hunted deer and fished. 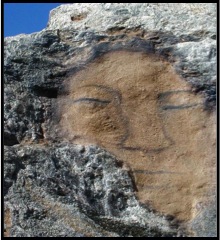 Because of the Red and Assiniboine rivers, it was easy for people to come together to trade their special products with others. Aboriginal Elder oral history tells of a Peace Meeting of several tribes held at The Forks over 500 years ago. Intensive hunting and fishing occurred in conjunction with the important trade and territory discussions.

My aunt noticed the Healing Rock, across the pathway, a massive granite stone weighing about ten tonnes and estimated to be millions of years old. I told her a Metis artist Natalie Rostad Desjarlais created this as tribute to the Aboriginal community, using her talent to highlight the hidden images within the rock. Gazing closer my aunt could see images of an eagle, and human faces.

The rock originates from St. Francis Xavier. A number of years ago The Forks was contacted by the artist looking for a place where more people would see it. We made arrangements to truck the Healing Rock to the Forks. 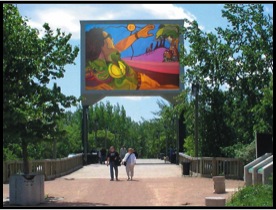 Next up was the colourful mural painted by Aboriginal artist Mike Valcourt on the Historic Rail Bridge’s counterweight. The mural pays tribute to Cree artist Jackson Beardy as well as the other members of the 'Indian Group of Seven'. In the words of the artist, “Beardy painted the legends of his culture and became a legend himself.”

We crossed the bridge to the South Point where some historians believe Fort Rouge (1738-1749) was established by La Verendrye. La Verendrye was the first European to meet the First Nations peoples camped at The Forks.

What’s in the future for South Point ?. The Forks is presently working with a group called The Treaty Legacy Foundation on an intriguing concept for this site. Their goal is to create a venue and program that builds public awareness about treaties and the relationship of treaties to present day issues affecting both Indigenous and non-Indigenous people. The group’s planning includes the commissioning of a feasibility study and preparing design concepts for the project.

Our walking tour ended with some shopping in the Market and some delicious fish n chips. Later that evening while relaxing and reflecting on the day’s activities my Aunt commented on how much she enjoyed the stories behind The Forks…”it’s what gives the place “soul”. It’s been 25 years since renewal of the abandoned rail yard began. My walk that day was a reminder of how important it is to share the stories behind this historic site.